You are here: Home > Peculiar Pedal Power
By Jade Rolph from Corporate Partnerships on 27 September 2013 2

I commute to the Alzheimer’s Research UK office on my Brompton, a small but perfectly formed example of British engineering. I have inventively named him Brom.  Brom and I rarely stray from our route to work but this August we went a little wild and took part in the World Brompton Championships at Goodwood Motor Circuit.

The race itself has a Le-Mans style start with up to 1,000 riders sprinting to their bikes, unfolding them and setting off on a 15.2km ride around Goodwood Motor Circuit. There is a firm dress code of jacket, shirt, tie and strictly no Lycra. The dapper participants set off in staggered groups and the race attracts all abilities from semi-professionals to complete novices. 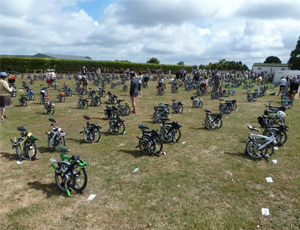 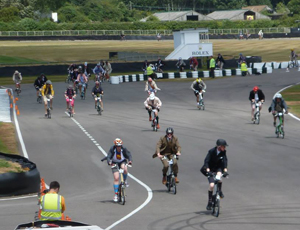 When choosing a cycling challenge think about events which are fresh and exciting. Ask yourself ‘how can I make this weirder or harder?’

When the race began I found Brom alarmingly unstable without the added weight of my work luggage, but we soon got into the swing of things and four laps flew by. After speeding across the finish line I collected my free packed lunch and G&T and settled down on the grass to picnic with the other cyclists – there is something delightfully British about the whole affair! My efforts placed me 220th out of 700 riders and I was the 21st woman to cross the line.

I wasn’t alone whizzing around Goodwood; my great aunt and uncle were also competing and had been busy collecting sponsorship for Alzheimer’s Research UK. They are seasoned cyclists and Brompton enthusiasts but their friends were still happy to support them because the Brompton World Championship is such a quirky event. 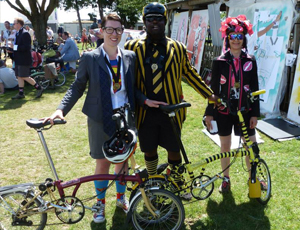 A constant rotation of fundraising events means that corporate supporters often suffer from fundraising fatigue, making it difficult to ask friends and family for sponsorship time and time again. Cycling challenges are becoming increasingly popular and I believe that a little injection of imagination is vital in ensuring that you are still able to hit your sponsorship target. When choosing a cycling challenge think about events which are fresh and exciting. Ask yourself ‘how can I make this weirder or harder?’ A quirkier ride is likely to mean more press coverage, more sponsorship, and ultimately more money for Alzheimer’s Research UK to invest in ground-breaking dementia research.

With a little imaginative Googling you can find eccentric cycling events online:

It’s likely that a few of your staff commute to work on Brompton bicycles. Perhaps they could join ‘team ARUK’ for the Brompton World Championship 2014?

Tagged with: Fundraising
Is this fundraising call genuine?
Ladder couples – working together as a pair