You are here: Home > Pledge to defeat dementia
By Clare van Lynden from Policy on 26 June 2014 0

We are pledging to find a cure for dementia; will you pledge to join us?

Through the overwhelming commitment of our supporters we have been funding leading dementia research for over 20 years. Vital discoveries are being made all the time, shedding further light on Alzheimer’s and other diseases that cause dementia.

We couldn’t do this without your support. That’s why we want to invite you to go one step further and join us in making a pledge to defeat dementia. As well as your fundraising and very generous donations, adding your voice to our campaign will help us make sure defeating dementia is at the forefront of Government policy and, ultimately, a global priority.

Dementia is one of the biggest health crises of our time and to defeat it requires commitment on both a national and international scale:

The good news is we are making progress. In 2012, Prime Minister David Cameron launched the Dementia Challenge and committed to double government funding of dementia research – an incredible milestone in our journey to make dementia a national priority.  Furthermore, following the G8 Dementia summit last year, a Global Dementia Envoy has been appointed and a World Dementia Council formed, providing much needed international leadership to drive innovation and development of treatments for people with dementia. These are fantastic advances.

But we must remember, even though dementia is climbing up both national and international agendas, and more is known about the diseases that cause dementia than ever before, effective treatments and a cure are not just around the corner. There is still a critical lack of investment in dementia research and no treatments to slow down or stop the disease, let alone potential cures for Alzheimer’s and the other diseases that cause dementia.

Our shared ambition to defeat dementia has never been higher, but if we are going accelerate progress in research and find treatments to benefit people with dementia sooner – we need the funding to match that ambition. We believe that research funding will need to be doubled every five years to have any chance of finding a cure by 2025.

The only hope we have of unravelling the mysteries of these complex diseases is through rigorous research, increased pressure on governments around the world to do more and the continued commitment of all of our supporters.

Here at Alzheimer’s Research UK we are on the case but we can’t do it without our supporters. We need all the support we can get to make sure defeating dementia stays at the forefront of Government policy. That’s why we’re calling on you to make a pledge to defeat dementia and campaign on our behalf in your local area – we can make policy makers hear but we need your support to make sure they listen. There are a number of ways to do this, including writing to your MP and local events and meetings, and we can support you to have a strong local voice on dementia research.

So, if you would like to find out how you can add your voice to our campaign and make your pledge to defeat dementia, please call 0300 111 5555 or visit www.alzheimersresearchuk.org/campaigners/. 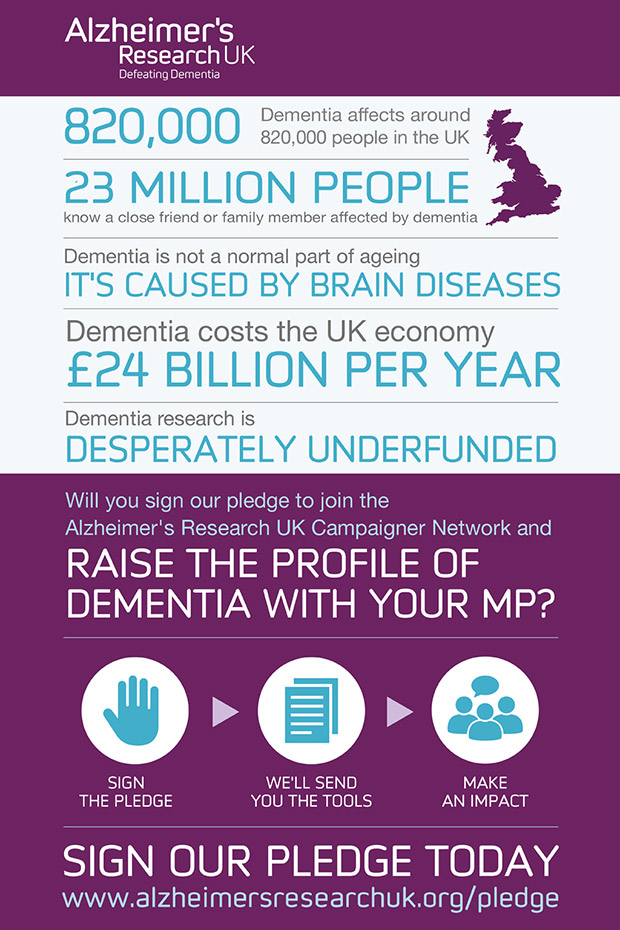