You are here: Home > Everything you need to know about PPA
By Katy Stubbs from Science news on 22 January 2020 3

When we hear the word dementia, changes in memory are the primary symptom many of us think of, however there is a range of other symptoms many people face to varying degrees. You may have seen the sad news that Terry Jones has passed away with a type of frontotemporal dementia known as primary progressive aphasia (PPA). Terry, along with his family, fought to break the silence around dementia by sharing his story and raising awareness of the lesser known symptoms he faced.

What is primary progressive aphasia?

The term PPA covers three separate conditions, all of which affect speech and language in different ways. These are

In semantic dementia, people gradually lose their knowledge of the meaning of words while still being able to speak relatively fluently. At the early stages, they can still speak in sentences but may replace a number of words with increasingly vague terms. For example, ‘rose’ may become ‘flower’ and ‘Labrador’ becomes ‘dog’ then ‘animal’, before ultimately they may both be referred to as a ‘thing’. People with semantic dementia can also struggle to know what everyday objects are for, and may not understand when the meaning of a word is explained to them.

People with progressive non-fluent aphasia (PNFA) find speech involves an increasing amount of effort. Despite knowing what they want to say, someone with PNFA finds it difficult to actually produce the words, making their speech slow and laboured. They may also make grammatical errors and miss out words, making it difficult to understand what they are trying to say. Some people with PNFA can develop word reversals and say the opposite to what they intended, such as saying yes when they mean no.

The third type of PPA is logopenic primary aphasia, and people with this form are generally able to understand language and produce speech, but may struggle to find the words they want to use. This leads to slow speech with frequent pauses as people search for the word they want to use. People with logopenic primary aphasia can also struggle to say words correctly, and find understanding sentences difficult, making communication increasingly problematic.

As each of these conditions progresses, people with primary progressive aphasia find it more difficult to communicate with others, both in producing speech and understanding what other people are saying. There can also be other symptoms, such as in PNFA, where people may experience problems with movement, such as tremors and unsteadiness. The progression of semantic dementia can result in the development of behavioural changes, such as obsessions and narrowed interests, compulsive and complex repetitive behaviours, and increased sensitivity to pain and other stimuli. These behavioural changes are also seen in the other main form of frontotemporal dementia, called behavioural variant frontotemporal dementia, often making it difficult to differentiate people with semantic dementia at the later stages of the disease.

What is happening in the brain?

Primary progressive aphasia is a type of frontotemporal dementia, which affects either the frontal or temporal lobes of the brain, or both. Researchers have shown that brain cells die in these regions due to the build-up of toxic proteins, which include tau, FUS and TDP-43. A small number of people have faulty genes that lead to the build-up of these proteins, but in the majority of people there is no clear genetic cause of PPA. 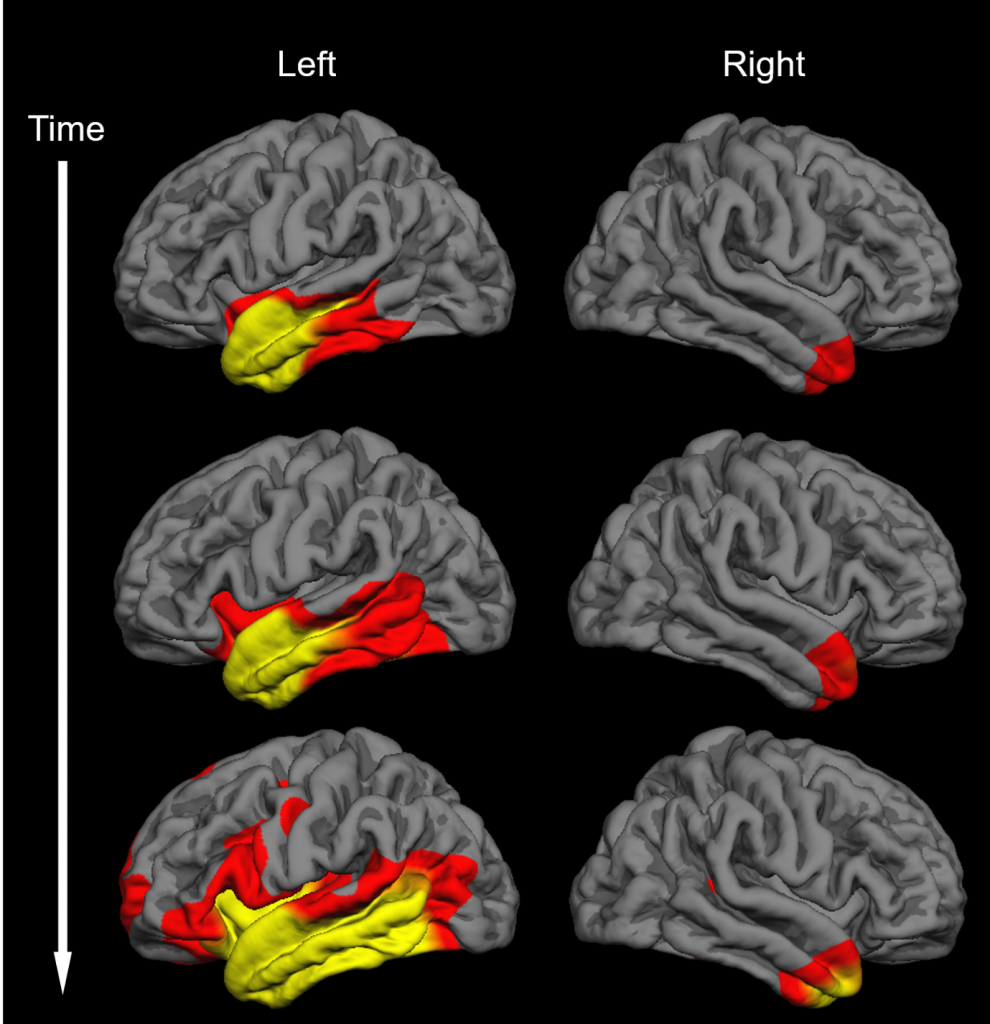 The understanding and production of language is handled by the temporal lobes, and it is these areas that are predominantly affected in PPA. The language centres of the brain are located on the left side of the brain in the majority of people (95% of right handed people and 60% of left handed people), and it is this area that is largely affected in semantic dementia and progressive non-fluent aphasia. In logopenic primary aphasia, the loss of brain cells is seen in areas more towards the back of the brain.

While PPA is considered to be a type of frontotemporal dementia, the changes in brain cells seen in logopenic primary aphasia can more closely resemble what happens in Alzheimer’s disease in some people. However, if problems with speech and language appear before memory problems, then a doctor is more likely to diagnose LPA.

What research is going on?

As the UK’s leading charity funding dementia research, Alzheimer’s Research UK has driven over £27.3m into studies of both the causes of frontotemporal dementia and potential ways to treat the disease.

In ongoing studies, researchers are trying to understand how toxic proteins cause damage in the brain, whether waste disposal systems can be boosted to remove toxic proteins, and the interplay between the toxic proteins and the immune system.  Our Drug Discovery Alliance is working to create drugs that can improve the lives of people with PPA and other types of dementia.

Where can I turn to for support?

You can find more information about frontotemporal dementia and primary progressive aphasia on our website.

The Rare Dementia Support Group is a specialist service that provides opportunities for people affected by rare dementias to engage in research and access support. They have a dedicated PPA support group, and you can find out more about this at www.raredementiasupport.org.

Tagged with: Frontotemporal dementia, FTD, PPA, primary progressive aphasia
What we must see from the government’s ‘Dementia Moonshot’
How to guide: organise your own walk

3 Responses to Everything you need to know about PPA