You are here: Home > Rules and regulations: removing hurdles in the race for a treatment
By Kirsty Marais from Science news on 13 January 2015 0

When we talk about speeding up drug development, the image that probably springs to mind is a lab full of scientists in white coats, working hard on the problem at hand. Most people won’t think of rows of MPs in the House of Commons, yet our politicians have a big part to play in the process – and it’s not just about making more funding available for research, important though this is.

In a recent article for the journal Neuron, a group of experts argue that changes to government policy could act as a catalyst for more rapid innovation by removing barriers in regulation and stimulating research into diseases that affect the brain. Although the article focuses on US policy, similar arguments apply here in the UK, and at Alzheimer’s Research UK we’ve already been making the case for policy change. Our Manifesto sets out the steps we believe the next government should take to boost dementia research, by focusing on regulation and taking some bold steps to help deliver breakthroughs.

Creating a treatment for a disease like Alzheimer’s is possible, but it’s a challenge that’s so far proved tough to crack, and many pharmaceutical companies have turned their attention away from neuroscience in recent years. The authors for Neuron note that there are currently just 129 ‘big pharma’ drug development programmes for brain diseases, less than half the number that were running five years ago.

Much of the problem can be traced back to the time needed to develop treatments for dementia, and the likelihood that companies putting money in will be able to recoup their costs in the long-run. At Alzheimer’s Research UK we’re tackling this challenge with initiatives like our Dementia Consortium, but this is one part of the picture. We believe changing the way clinical research is regulated could encourage investment and bring desperately needed treatments to patients sooner. 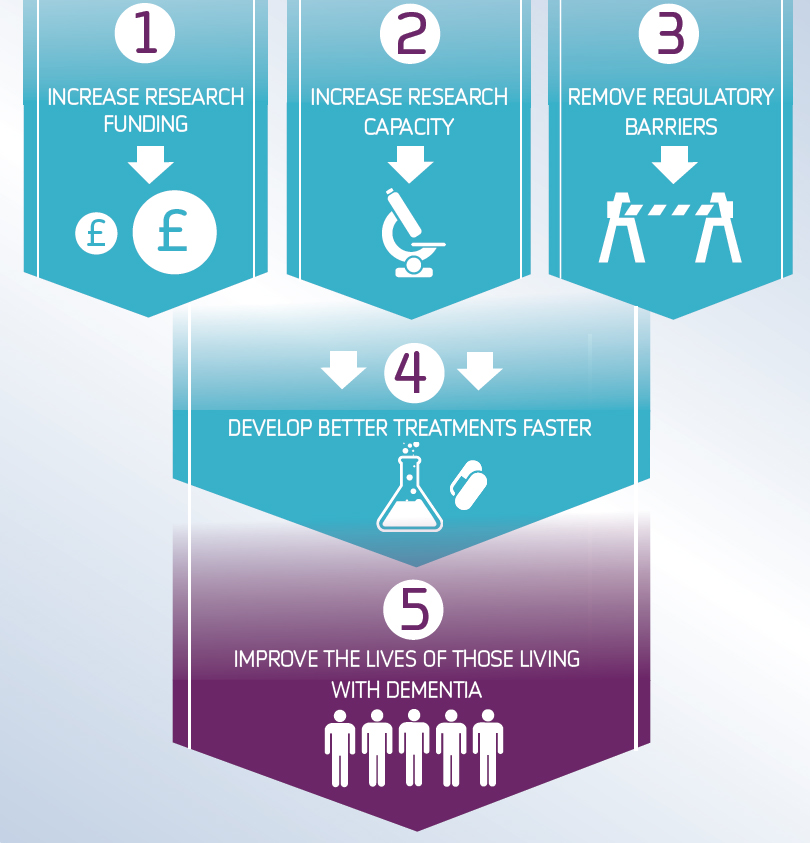 Removing regulatory barriers is one of five key steps which would see the UK take the lead in defeating dementia.

Drug development takes time, and this is especially true for diseases that cause dementia, which develop slowly over many years. To know whether a treatment for a long-term disease like Alzheimer’s is effective, clinical trials need to run over several years.

But to add to this, the legal process of getting a trial up and running is lengthy and complicated. Gaining approval for a trial can involve many different regulators in different parts of the world. Encouragingly, regulators are now talking about how they can support dementia research – finding a way to harmonise and simplify their requirements could help ease the process of starting a new trial.

Once trials are completed, it’s imperative that successful drugs can be put into the hands of patients quickly. Before a new medicine can be made available, regulators need to give licensing approval, a process that can take a year and a half on average. This procedure is vital to ensure new drugs are safe and effective before they are given to patients, but the approval process can also mean a frustrating wait for the people who need them.

For dementia, where there are currently no treatments able to stop or slow the diseases that cause it, there is a real need to speed up this process. The recently-launched Early Access to Medicines Scheme aims to give patients with life-threatening conditions access to breakthrough drugs that, while known to be safe, have yet to be licensed. This scheme is in its early stages and we hope to see it developed further, with priority consideration for dementia treatments. More generally, efforts could be made to streamline the approval process with different regulators.

The extra time needed to develop dementia drugs means the costs are likely to be higher, and the potential financial rewards lower than in other areas. As a charity, Alzheimer’s Research UK doesn’t invest in research to make a profit, but for commercial companies this is necessarily an important factor. We’re increasing our own investment, but we need all sectors working on this challenge and to get new treatments to market, we need the pharmaceutical industry. To encourage pharmaceutical companies to stick with their neuroscience programmes, policy makers could investigate the potential for financial incentives, for example by reducing regulatory fees for firms that are working in this area.

Regulations are important for ensuring drugs are developed responsibly, and any changes would need to be made in a careful, considered way. But by looking again at how the regulations work, we could create a better environment for research, and ultimately, deliver new treatments more quickly. Dementia poses unique challenges to people affected, to society and the economy – and such a special case requires us to think differently about how we respond to it.

With the general election approaching, we’re asking political parties to sign up to these ideas, and we want to ensure the next government puts dementia research at the top of its agenda. We need your help too – by becoming an Alzheimer’s Research UK Campaigner, you can add your voice and together, we can get our message to the people in power.