I did an undergraduate degree in Zoology and Genetics and then I worked in scientific publishing for a while, as well as doing a few events with the Zoological Society of London. But I got tired of reading and hearing about research, I wanted to get more actively involved. So I enrolled on an MSc at the University of Nottingham which led me to my PhD. I was particularly interested in understanding the genetics of disease. 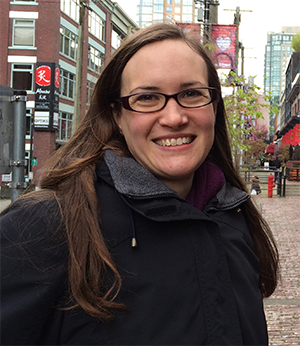 A close family member was diagnosed with dementia when I was getting back into my studies, so the genetics of Alzheimer’s disease was what I really wanted to study.

Why is this area of research important? What hope does your work bring to people with dementia?

There is still so much that we don’t know about Alzheimer’s disease and dementia as a whole. There are so many questions that need to be answered and genetics is a good starting point to untangle the biology behind the disease. This can help to point the way towards biological chains of events that we can target to help treat the disease.

So far in my Alzheimer’s research career, it would be attending the world’s largest dementia conference – Alzheimer’s Association International Conference – in July. It was fantastic to be part of an international forum of researchers all coming together and tackling the problem of Alzheimer’s disease.

You make your own luck sometimes so by putting in the work you increase your chances of in being a position where you can get involved. I think communication between dementia researchers in different fields will be key to cracking this global health issue.

Am I allowed to say genetics? That’s a bit biased … I think coupling genetics research with more functional studies will shed further light on possible disease mechanisms which could be targeted for therapeutic intervention. This means taking the genes that we pinpoint in our large genetic studies and working out what that gene does in the body, what biological processes it controls and what part these processes play in Alzheimer’s disease. Genetic research has played an important role in highlighting the role of the immune system in Alzheimer’s, which is now a really promising and fast-moving area of research.

Knowledge is power and knowledge is how we are going to fight this disease.

I like to play bass guitar, just casually jamming with friends.

I run – I’m looking at the possibility of running for Alzheimer’s Research UK in the future. I’m aspiring to run a marathon someday.

I also knit – I managed to knit myself a whole cardigan which I’m very proud of.

The power of dementia research
The orchestral brain