You are here: Home > Scientist Focus: Chris Medway
By Kirsty Marais from Science news on 19 January 2015 0

Dr Chris Medway, from the University of Nottingham, was awarded our Sir Terry Pratchett Fellowship in 2012. As part of the three-year fellowship, Chris has spent the last year working at the Mayo Clinic in Florida searching for rare genetic changes that alter the risk of Alzheimer’s disease. I caught up with him as he arrived back in the UK, fresh from his travels and ready to continue his work in Nottingham. 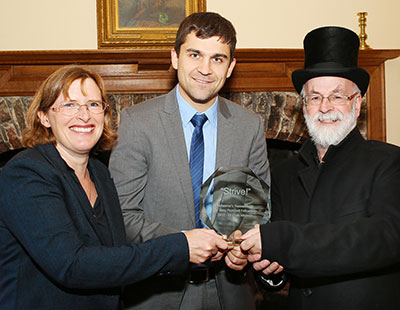 I was always interested in science. I went to the University of Nottingham and did my undergraduate study in neuroscience – that covered a range of disciplines, including neurogenetics which had a large focus on Alzheimer’s disease. That was when I became aware of the work Prof Kevin Morgan was doing in Nottingham on genetics, and I continued working in Kevin’s lab when I did my MSc and PhD.

During my PhD I collaborated closely with Steven Younkin at the Mayo Clinic. The Mayo Clinic have a tremendous resource with around 8,000 genetic samples, so it was an easy decision to work with him. With genetic studies the more samples you have, the better it is, especially when you’re looking for rare genetic mutations.

What does your research focus on, and why is it important?

There have been a lot of great genetic findings in the last few years using Genome-Wide Association Studies (GWAS), which look for changes in our genetic code that influence the risk of disease. Those approaches are good at identifying regions of the genome that are important, but it’s a bit like digging for treasure where X marks the spot. What’s been missing is the translational aspect: the ability to find mutations in specific genes within those regions that affect proteins in the body.

The work I do capitalises on the work already done by GWAS. I’m looking for genetic variations that change proteins, because these tell us about disease mechanisms that we can act on, so these findings can be exploited in the search for treatments.

How has collaboration helped your work?

It’s been great to go abroad and throw myself into a new environment. I’ve been very fortunate to work with Steven Younkin, who pioneered a lot of the early work on amyloid, a protein that plays a crucial role in Alzheimer’s. The Mayo Clinic has a lot of very bright people and a great track record, and not many places in the world are better equipped, so it was a great opportunity and it’s been a mutually beneficial collaboration. I’m going to continue to collaborate with the guys there.

How many people do you work with in your lab?

At the moment our lab in Nottingham has two post-doctoral researchers, two technicians and four PhD students. Now I’m back, I’m looking forward to sitting down to have a good lab meeting with everyone. There’s a lot of work to do!

What’s been the highlight of your career so far?

For me the highlight was finishing my PhD and getting the funding for my fellowship from Alzheimer’s Research UK. That support has been instrumental. Receiving the Sir Terry Pratchett Fellowship, and getting to meet Sir Terry to receive my award, was also a highlight and completely unexpected. 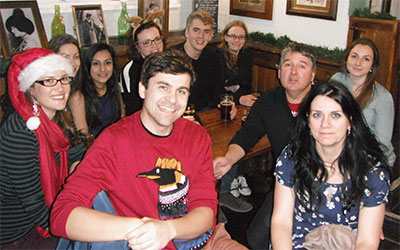 Chris (front) with colleagues from the University of Nottingham laboratory.

What advice would you give to scientists embarking on a career in dementia research?

If possible I recommend immersing yourself in a different environment, ideally in a different country with a different research culture. Going somewhere without the comfort of your PhD tutor is an important step for developing as a researcher.

I’d also say to be aware of the part you play in the bigger picture, and to make sure you’re doing something that’s necessary to the problem you’re working on. It’s important to read the literature and realise the blind spots, where there isn’t a lot of work being done, then try to fill that spot so that all aspects of research are covered.

What do you think is the most promising area of dementia research right now?

What’s exciting to me is the role of immune cells in the brain called microglia. A lot of the mutations that have come out of genetic studies, such as TREM2, are pointing to a very important role for microglia in Alzheimer’s disease, and research from other disciplines is pointing to the same thing. It was maybe under-researched before, but I think perhaps its time has come.

How would you convince someone about the importance of dementia research in one line?

Dementia can affect anyone, and although it’s a major problem now, 25 years from now it has the potential to be a massive social burden. We need to deal with it now because it’s a ticking time bomb.

I’m a keen guitar player and I play in a few bands, I really enjoy that. I like to cook as well, and I’m currently experimenting with making different types of bread.

There are a few things really, but if I have to pick one it would probably be a cup of tea – especially now I’m back in the UK!

Tagged with: Dementia research, Sir Terry Pratchett, Scientist focus
Rules and regulations: removing hurdles in the race for a treatment
TREM2: Where are we now?