Tell us a bit about your career path

After my PhD and a few years as a post-doctoral researcher in London and the United States, I started work at GlaxoSmithKline – a large pharmaceutical company. There, I led a number of projects that aimed to find treatments for chronic pain and also for neurodegenerative diseases. My next step was to establish a biotechnology company that focused on new treatments for chronic pain, before moving on to co-found another start-up company that is focused on drugs to halt tissue damage. I’ve been working in drug development for over 20 years and am pleased to have been able to help guide several drugs into clinical trials. 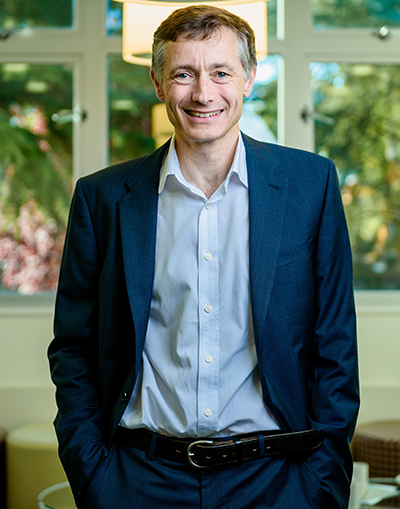 Why have you now got involved in dementia research?

One of the reasons I’m particularly keen to get involved in dementia research is because of the need. We’ve woken up to the problem over the last few years. There are over 850,000 people in the UK living with dementia and that’s a challenge that every scientist wants to grapple with. We desperately need to find ways to improve the lives of people with dementia and medical research has the power to do that.

What research will take place at the Oxford Drug Discovery Institute?

We’ll be combining drug discovery expertise with the huge amount of knowledge about the diseases that cause dementia that is held within the University of Oxford, and across the UK. Drug discovery for dementia is a big challenge because we still have a limited understanding of the brain. It’s very difficult to probe the brain – you can’t easily take a biopsy like you can with the liver or other organs. The process of drug discovery itself is also very complicated, with many different steps and lots of questions to answer at each stage. I’ll be leading the team at Oxford to look for new approaches to treat Alzheimer’s and other causes of dementia.

We’re looking for ‘targets’ – proteins or pathways that play a role in the course of the disease and that we can modify with drugs to help halt damage in the brain. We’ll design and make lots of different chemical compounds that bind to a particular target protein and affect the way it works.

We also have to design ways to study the disease in the laboratory and use these laboratory ‘models’ to test whether any of the experimental drugs we have made are likely to have an impact on the disease. You have to test many different experimental drugs, and go through phases of optimisation and tweaking of these chemical compounds, until you get a drug that can go on for further development, such as safety studies and the initial stages of clinical trials.

What are your favourite bits of the drug discovery process?

I suppose I should tell you which bits I find the most exciting and nerve wracking, because that’s what determines whether they’re favourites or not! I enjoy the discovery angle – following how the molecules that I’ve helped to design progress through the development process.

A screening cascade is a series of tests that your experimental drug must pass to progress on to the next stage of development. In the screening cascade there are key ‘go-no go’ points. For instance, you might be testing an experimental drug in cells in a dish or in animals that have key features of the disease. If it works there, if it works, these are important steps and cause for optimism. If it doesn’t then it’s back to the drawing board. The particular stage of the cascade where a drug fails is important as it tells us about what tweaks we have to make to improve the properties of the next molecule we make.

The other stage I find exciting and nerve-wracking is the first time you give a drug to a person, so called ‘first time in human’ studies. You’re desperate for two things, firstly that the drug is safe and secondly that it looks like it might be having an impact on the target protein. Getting data back from the first small group of patients who try the new drug, that’s when you see whether years of effort has been worthwhile. The experimental compounds we will be creating in the Oxford Drug Discovery Institute will need to go through further stages of development, but ultimately we hope they’ll lead to drugs that will be able to enter these critical ‘human’ studies.

How would you inspire any young budding scientists?

I can simply tell you what inspired me. When I was a child, I was really into all the explorers, such as Shackleton and Amundsen. For me, the human body and the mechanisms in it are a final frontier for exploration. Science is a real search and that can be incredibly exciting, incredibly rewarding and incredibly challenging.

Outside work I like to spend as much time on the water as possible, preferably sailing on the sea but when desperate, any craft on any puddle of water will do! Fortunately none of my family are sun worshippers, so we fill our holidays with activities, long walks with our dog or visiting sites and cities. I am also trying to teach myself to play the banjo, a great distraction but also very frustrating!