You are here: Home > Sir Terry Pratchett: The fantasy author’s legacy to dementia research
By Hilary Evans on 10 February 2017 0

It was just under two years ago we received the news – Terry had finally lost his fight with Alzheimer’s. Our office just outside Cambridge fell very quiet. A few of us glanced over to the photo of Sir Terry we have on our wall, behatted as ever, and leaning nonchalantly on a farm gate somewhere in Wiltshire. He looked a bit grumpy in that photo. Then the phones started ringing. People wanted to know our reaction.

In the interviews after the death of Sir Terry Pratchett, the most common question we were asked is “what did he mean to Alzheimer’s Research UK”? Terry was incredibly generous to us, he donated over $1 million to our research to help reveal the mysteries of his disease. He encouraged our scientists. He became our Patron. He was angry about his diagnosis, outraged that the condition was stealing his abilities and sense of self – he helped us campaign around the disparity in funding for dementia research. 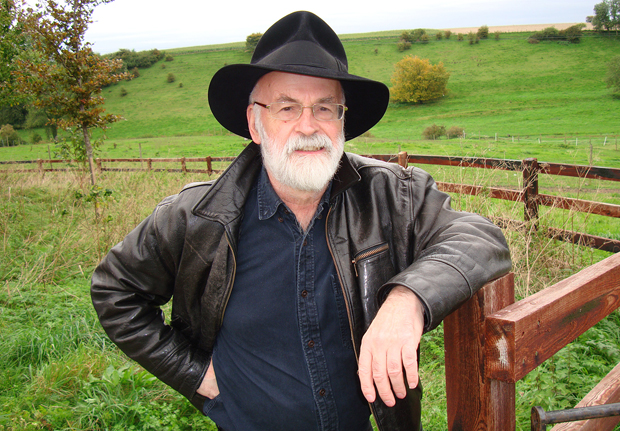 As a small organisation fighting a big enemy, he gave us the confidence to think bigger. He led a march to Downing Street, delivering a petition to then Prime Minister Gordon Brown demanding fairer funding for dementia science. Mr Brown received the signatures in person and had a cup of tea with Terry – kicking down the doors of power delivered with unique British character. Since then there have been changes of government and leaders, but political will to rise to the challenge of dementia has never been higher, here and around the world.

But what we kept coming back to in the days after his death were, fittingly, his words. How he talked about his disease, the language he employed – arresting and evocative – was a new type of conversation around dementia. He began to make it OK to discuss a diagnosis, in the same way that people are now rightly emancipated to talk about their cancer.

“People ask me why I announced that I had Alzheimer’s. My response was: why shouldn’t I? I remember when people died of “a long illness”, now we call cancer by its name, and as every wizard knows, once you have a thing’s real name you have the first step to its taming. We are at war with cancer, and we use that vocabulary. We battle, we are brave, we survive.”

Sir Terry knew, like us, that we have to start to believe we can fight dementia. Behind those debilitating cognitive and emotional symptoms are brain diseases, most commonly Alzheimer’s, just as physical and just as real as cancer. Saying dementia’s name was a crucial first step towards ultimately taming it. With desperate sadness, we couldn’t achieve this in time to help Terry – we are playing catch-up with other disease areas – but thanks in no small part to his help we are now fighting it meaningfully in the lab and in the public consciousness.

It can be a convenient narrative to pin a turning point in an organisation’s history to a single person, and the reality is that many tens of thousands of supporters, scientists and staff make this charity what it is today. But as we lay increasingly important paths towards breakthroughs in research, increased public understanding, greater political will and more funding for our scientists, there is no denying that a lot of those paths lead back to Terry Pratchett.