Vivien Hunot retired after turning 60 in 2015. But instead of putting her feet up Vivien vowed to raise as much money as she could for Alzheimer’s Research UK by completing 60 tasks to mark the occasion. While the list featured nicer tasks such as watching Flamenco dancing in Seville and riding a tuk tuk in Mumbai, others included going through sewers, holding a snake and getting a tattoo. In honour of her dear mother-in-law Grace, who died with Alzheimer’s disease 20 years ago, Vivien raised nearly £2,000 with the help of her blog – Sixtyat60 – where she documented her unusual challenge.

Life is for living

‘Life’s for living’ my mother-in-law Grace used to say to my husband Andrew and me, as she gently ushered us out of the house to get some much-needed downtime as young parents. Grace was a sweet-natured, gentle, modest and dignified person. She adored her grandchildren, loved all animals, was a devout church-goer and enjoyed a drop of mead on special family occasions.

When my father-in-law Philip retired, he and Grace fulfilled their long-awaited dream to move to the Dorset coast. But sadly all too soon Grace began to show signs of Alzheimer’s disease. She became forgetful, confused and withdrawn. She lost the ability to hold conversations, to feed herself and to engage in everyday life around her. Philip became ill through caring devotedly for her 24 hours a day, and Grace was eventually admitted to a local cottage hospital for long-term nursing care. Our three children grew frightened by the fragile and sometimes agitated lady they went to visit. And when Grace eventually died, we found it difficult to remember the person she had been before dementia took hold.

Since then, a number of other much loved relatives, friends and neighbours of ours have been diagnosed with various forms of dementia. This isn’t surprising of course, as it’s a highly prevalent condition. Yet research into Alzheimer’s and dementia diseases remains severely underfunded. So as I approached my own retirement last May, at the age of 60, I was keen to do some fundraising for Alzheimer’s Research UK. 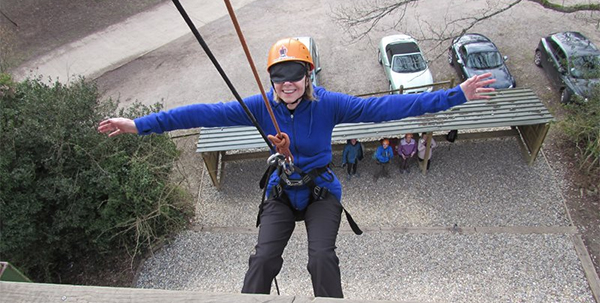 It seemed fitting to organise an event which reflected Grace’s ‘life’s for living’ philosophy. Thus my ‘sixtyat60’ challenge was born. Quite simply, I had to complete 60 pre-specified tasks between my 60th and 61st birthdays. Some tasks challenged me to do activities that I believed I was too long in the tooth for, such as running 10k in 60 minutes and cycling 60 miles in a day. Other tasks nudged me into facing fears – I had to hold a snake and go abseiling! Further tasks encouraged me to be creative, try different forms of travel and do volunteering. Family and friends had a key role throughout the challenge. They identified tasks for me to complete (would I have ever plucked a chicken otherwise?) and accompanied me on every activity as witnesses and supporters.

Each time I completed a task I wrote a no holds barred blog about it – disasters and hurdles were as important to report on as successes! For instance, my daughter Lucy lost her passport at the eleventh hour and couldn’t travel to Stockholm with me to meet the Swedish singer-songwriter Anna Ternheim, and a dear friend fell over and fractured her wrist whilst ice-skating with me at Somerset House. But equally I’ve experienced many wonderful moments – walking 60 miles along the Ceredigion Coast Path, playing a saxophone riff and dancing the Lindy Hop on Brighton seafront are stand-out memories. And I’ve been constantly bowled over by peoples’ kindness and generosity along the way.

Now the million-dollar question – did I manage to finish the sixtyat60 challenge by the deadline? Yes I did! I published my final blog just 4 hours before my 61st birthday ended. I like to think that Grace would be proud of my endeavours and might even be raising a small glass of mead to celebrate its completion. This post is written in her loving memory.

Vivien Hunot is a retired psychotherapist and researcher from Uckfield, East Sussex. She retired on reaching her 60th birthday on 30 May 2015. To mark the milestone she set herself 60 tasks to complete by her 61st birthday to raise money for Alzheimer's Research UK. She took up the challenge in honour of her caring mother-in-law Grace, who sadly died with Alzheimer's disease 20 years ago.
View all posts by Vivien Hunot →

Learning from cancer research in the hunt for dementia treatments
42 countries, two wheels, one man