You are here: Home > Skydiving in the name of dementia research
By Dorothy Parnell on 24 January 2014 0

In the four years after my husband Mike’s death, I had sat in my daughter’s garden many times and watched the parachutists jump out and float down towards the nearby airfield. 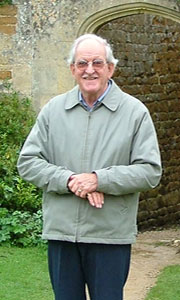 Watching Alzheimer’s disease gradually develop and take hold of Mike after 60 years together, until he had to go into a specialist home, and then watching the condition progress until his death had been a harrowing experience – for me and all the family.

In the time that followed, I became fascinated by the idea of doing a parachute jump and then the two things came together. Especially as my brother-in-law has also been diagnosed with Alzheimer’s. He and his family are having to go through everything we did. The idea of somehow helping with the research to try to stop this disease took root.

At the age of 84, I was a bit nervous about it, as I won’t go up a ladder to change a light bulb! But having talked about it, we went up to the airfield and watched the parachutists take off in the airplane, jump out, float down and land (the bit I dreaded most).

I had spoken to my friends at the Beccles Morning Women’s Institute (WI), and they were all really enthusiastic. Promises of sponsorship soon appeared and I found myself at my doctors to get the necessary (at my age) certificate that I was fit enough to jump.

At the age of 84, I was a bit nervous about it, as I won’t go up a ladder to change a light bulb.

My grandson Mark Cudmore had also watched his Gramps’ decline and was keen to support me by jumping alongside – that was very welcome support. So the next thing, I was up at Beccles airfield booking the jumps – no turning back then.

It turned out to be a warm, sunny and bright day, only a little cloud and not too much wind. When we got to the airfield, the WI were there with a minibus and large banner of support, together with my family and a crowd of supporters.

It‘s a very busy place and there were a lot of people waiting their turn to jump; many like me, waiting to jump ’tandem’ (attached to an instructor). Planes were going up and down with a never ending stream of parachutists.

Then into the hanger for instructions and trying to concentrate, so I could remember what to do. You have to get it right; otherwise you could hurt yourself or the instructor if you don’t hold yourself correctly. I then had to dress up in a bright orange one piece over-suit and helmet – it was then a case of waiting!

We were called and off I went with Mark and my instructor to be wedged in the plane like sardines in a tin. It seemed to take a long time circling up to the right height. We went right over the coast, five miles away and the view was good. Then the engine noise changes and it’s out we go…

I wasn’t too nervous and had been looking forward to the view, but when you first go out, you tumble around a fair bit – and that was a bit hectic, especially as you have to try and listen to the instructor when he says something. 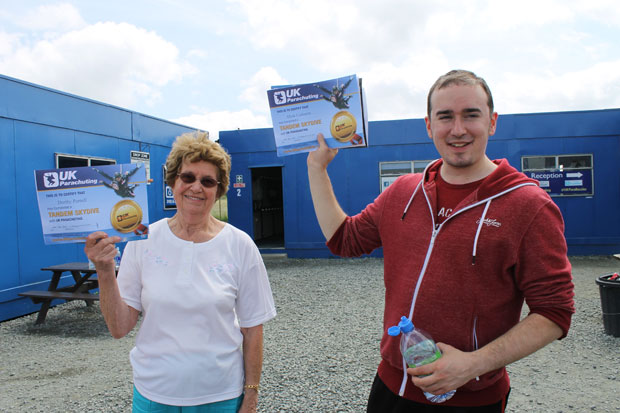 Dorothy Parnell and her grandson Mark Cudmore after their skydive

After the freefall, the parachute goes out and peace is restored. You can see all around as you come down and see the crowds waiting as you get closer to the ground.

This is the bit I was wary of though, so legs out in front and – bump – we’re down! Mark had landed nearby.

I was fine and once the instructor had gathered up the parachute, off we went to the waiting supporters. What a day!

I think my Grandson would like to do it again. I’m not sure I will! But it was a fantastic experience.

I’m very grateful for the support of Mark, family and the WI and friends – and I’m very proud that we have raised well over a thousand pounds to help fight dementia and in memory of my husband.

Courageous great-grandmother Dorothy Parnell gave pioneering dementia research a boost after taking part in a tandem skydive to raise money for Alzheimer’s Research UK. Dorothy, 84, took on the challenge with her grandson Mark Cudmore. Together the pair raised over £1,000 from their challenge, which they took on in memory of Dorothy's husband Mike, who died in 2009 after a long battle with Alzheimer's disease.
View all posts by Dorothy Parnell →

All that glitters…
Painting the town purple