You are here: Home > Spotlight on frontotemporal dementia
By Dr Emma O'Brien from Science news on 5 October 2015 0

Forgetfulness and confusion are often the first things that come to mind when we hear the word dementia. But what about a shift in personality or a lack of empathy? How about changes in food preferences and a completely different sense of humour? All of these can be signs of frontotemporal dementia – the second biggest cause of dementia under the age of 65, but one with very little public awareness. Today marks the start of the world’s first ever Frontotemporal Dementia Awareness Week and a chance to reflect on the steps we’re taking to tackle the disease.

While the majority of the drug discovery efforts underway focus on Alzheimer’s disease, the leading cause of dementia worldwide, there is also a desperate need to treat other causes of the condition. There are some key overlapping features between Alzheimer’s and frontotemporal dementia (FTD), including the build-up of toxic biological molecules and nerve cell death. But there are also some important differences and a ‘one drug fits all’ approach may not work for dementia. That’s why Alzheimer’s Research UK has funded £11.5million of FTD research over the last 20 years, to understand more about the disease and to start the journey towards targeted treatments. 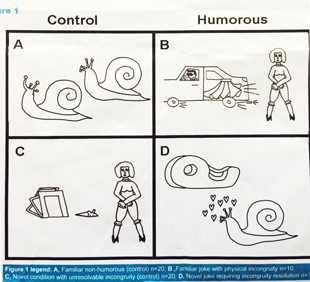 Frontotemporal dementia has lots of symptoms that people don’t normally associate with dementia. One of these is a shift in sense of humour.

If you’re anything like me, then your rucksack or handbag is a mess. Pens, tissues, chewing gum, train tickets…all tangled up in a pair of headphones and a couple of hair bands. If I could use any of these items that would be great, but they’re in a clump and consigned to the bottom of by bag. That’s one way of thinking about what is going on in nerve cells during FTD. A protein called TDP-43 plays an important role in the day-to-day running of nerve cells. But in nearly half of people with FTD, it forms clumps that stop it from working properly. Researchers believe that this has damaging consequences for nerve cells – not only does TDP-43 not work properly, but the clumps themselves could be harmful for brain health. Breaking up the clumps of TDP-43 could prove an important approach to treat many cases of FTD.

That’s exactly the tactic that researchers in Trieste, Italy, are pursuing. We’ve funded this international team of experts to boost early phase-drug discovery efforts for FTD. The team is working as part of the £3million Dementia Consortium, a unique partnership between Alzheimer’s Research UK, the pharmaceutical companies Eisai and Lilly and MRC-Technology. Through this partnership, we aim to accelerate the progress of promising leads from academic discoveries to treatments in the clinic.

The team is interested in waste disposal mechanisms inside nerve cells. They want to identify potential drugs that clear up the clumps of TDP-43, so that the ‘untangled’ protein is free to do its job and nerve cells are protected from damage. To do this they will test thousands of different drugs that kick-start waste disposal efforts in cells in the laboratory. They’re interested in drugs that not only clear the protein clumps, but are safe to be given to people. The team will then shortlist the most promising experimental drugs and use sophisticated biochemical techniques to explore their impact on cells. The researchers will then move on to test the compounds in fruit flies and mice to reveal whether they could help protect nerve cells from damage in a living system.

FTD is an incredibly complex disease. As well as the complex biology behind it, FTD has many features that people just don’t associate with dementia – especially when symptoms can begin as young as 40. Early phase drug discovery efforts like this are hugely important and Alzheimer’s Research UK is committed to funding pioneering projects that take us closer to treatments for FTD and other causes of dementia.

Read more about another new FTD study kicking off at the University of Salford this week.