Daryl Oliver is an author who has a health science degree and many years’ experience as a general nurse. She has five grown up children and lives with her husband in Cambridgeshire while studying for a Master’s degree in healthcare. Having experienced dementia both personally and professionally Daryl is releasing her latest work of fiction, Steel Wool. The book is about an intelligent Cambridge graduate Arthur Pavin who develops Alzheimer’s disease. The story is told through the eyes of his wife and carer Grace.

I first thought of writing a book about dementia after I had been working for some time in the Dementia Assessment Unit at a nearby hospital. Most of the families and relatives of patients I had spoken to had little or no idea of what to expect and were frightened by the prospect of the unknown.

So often these families felt terribly guilty about relinquishing care to another. But at the same time they were exhausted and felt they could not cope with looking after their loved one with dementia. On reaching crisis point, the person would end up being assessed in hospital, and a decision had to be made as to where best they should be looked after and cared for.

I wanted to write about dementia because I felt it was important for people to know what may happen as the condition progresses. While a cure has not yet been reached, which I know Alzheimer’s Research UK scientists are working hard on, we can at least try and prepare ourselves for the unpredictable nature of dementia, the loss of the person that we knew in the later stages, and of course the guilt and remorse many people feel when they encounter this condition in their families.

The book tries to explore the emotions which people might go through and in doing so gives people something to relate to and a structure of support. I hope through the book they will find comfort in the knowledge that their feelings, however difficult and terrible they may feel they are, are not unusual and are a perfectly natural reaction to dementia.

I’ve tried to incorporate some humour into the book despite the sad story, as would happen in real life. The character Grace Pavin ultimately comes to the realisation that her husband is no longer there like he used to be. She realises that he has somehow gone to another world of his own, one which she cannot touch, and so this brings her a little comfort and eases her pain.

In many cases a person living with dementia does not realise they have the disease. In this story, Arthur believes he is OK and can “help” in the kitchen, which results in him storing strange things in incorrect places, including a hot water bottle in the oven. 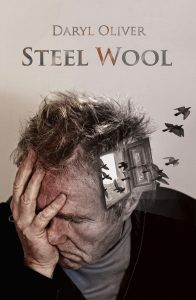 The decline in Arthur’s ability to eat and drink becomes apparent by the end of the book, as is his incontinence and the effect this has on Grace. Part of the tragedy is that neither Grace nor Arthur can fully understand what the other is going through, and all intimacy in their relationship is lost.
The main aim of Steel Wool is to try to establish empathy with some of the readers who may be going through similar situations as Grace and Arthur, while helping them find a way to cope with caring for a loved one living with dementia.

Steel Wool is available through Amazon at https://www.amazon.com/Steel-Wool-Daryl-Oliver/dp/1786126095 and the Austin Macauley Publishers website at http://www.austinmacauley.com/book/steel-wool.

If you’d like to know more about dementia you can order some of Alzheimer’s Research UK’s materials and literature through the website. Our information booklets, leaflets and posters answer questions about the diagnosis and symptoms of dementia, the treatments currently available, and the risk factors for developing the condition, for personal or organisational use.

Daryl Oliver is an author who has five grown up children and lives in Cambridgeshire with her husband. She has many years of experience as a general nurse, as well as a heath science degree, and is currently studying for a Master's degree in healthcare. Following years of both professional and personal experience of dementia she has penned the fictional book Steel Wool, about a Cambridge graduate living with dementia.
View all posts by Daryl Oliver →

Treatments of tomorrow: Preparing for breakthroughs in dementia
Hope for the future