You are here: Home > Taking aim at amyloid
By Robin Brisbourne from Science News on 10 March 2015 1

We’ve heard some very interesting talks already on this, the first day of the Alzheimer’s Research UK Conference 2015. Before lunch I attended a lively session all about the hallmark Alzheimer’s protein amyloid. Amyloid has long been a key focus for a great deal of Alzheimer’s research, but as today’s session showed, scientists are still discovering more about it all the time. We heard from three speakers who are taking very different approaches to investigating how this protein forms, its role in the disease, and how we might tackle it with future treatments.

In Alzheimer’s disease amyloid proteins stick together, build up, and form plaques around nerve cells. Researchers are investigating whether these amyloid plaques contribute to the nerve cell damage that causes the devastating symptoms of Alzheimer’s like memory loss and personality change. Amyloid is actually a fragment of a larger protein called the amyloid precursor protein (APP), which has a number of important functions in healthy brains. The suspect amyloid plaques only form when APP gets chopped up into sticky fragments that the brain then has difficulty clearing away. 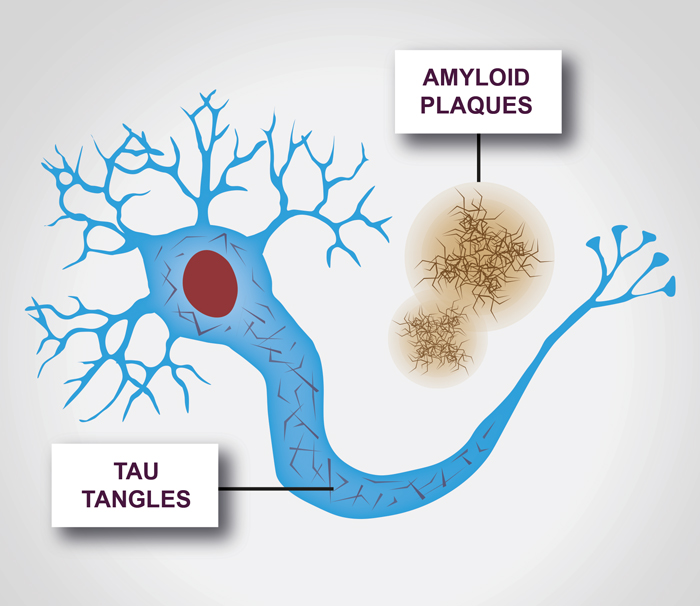 This morning’s session began with Prof Bart de Strooper, a leading expert in amyloid biology from the Flanders Institute for Biotechnology in Belgium, taking to the stage to give a presentation focused on the proteins called ‘enzymes’ that chop up APP to form amyloid. He explained his recent work detailing the role these enzymes, known as secretases, play in Alzheimer’s disease.

Preventing sticky amyloid from forming by blocking one or more of these secretases is a key goal for Alzheimer’s researchers around the world. While scientists have recently tested some medications designed to work in this way, none of them has yet been shown to be effective and safe when given to people. By studying secretases in minute detail, Prof De Strooper has revealed potential new targets for future treatments that act on the enzymes.

Prof De Strooper acknowledged the huge scale of the challenge that these drug development efforts represent and the enormous work still to do. However, as researchers are equipped with a more sophisticated understanding of the biology of these enzymes than ever before, he believes they may now be in a position to develop treatments that block the effect of secretases without producing the unwanted side effects that derailed earlier efforts.

Next up was Dr James Duce an Alzheimer’s Research UK Senior Research Fellow investigating the complex relationship between APP, iron levels, and damage to nerve cells in Alzheimer’s. He shared his findings into how the processes controlling iron levels in the brain might play a role in the disease. Iron is essential for our bodies to function and helps regulate the chemical reactions that provide our cells with energy. The audience heard how iron levels can be out of balance in Alzheimer’s and how this may contribute to the nerve cell damage seen in the disease. Dr Duce has discovered that APP helps to regulate the level of iron in the brain and has revealed the molecular processes that underlie this. He hopes his research could shed light on new approaches to maintain nerve cell health for longer in diseases like Alzheimer’s.

Finally, we heard from Rob Andrew an Alzheimer’s Research UK-funded PhD student at the University of Manchester. Rob has also been studying APP, specifically how it gives rise to amyloid. There are three major forms of APP and the brain seems to produce different amounts of these in Alzheimer’s disease. Sticky amyloid is more likely to form from one particular form of APP. Rob’s work is revealing the processes behind this, uncovering exactly what leads to different amounts of amyloid being produced from these different forms of APP. This research could highlight new targets for future Alzheimer’s treatments.

It was a great talk from Rob Andrew and particularly good to hear from an early career researcher with such obvious passion and enthusiasm for the important work he is carrying out.

Listening to the presentations today has been a fantastic opportunity to learn about some of the pioneering Alzheimer’s research underway right now. Sharing new findings and innovative approaches in a conference like this is a great way to spark the ideas and build the collaborations that will bring us closer to the treatments people affected by Alzheimer’s so desperately need.

This morning’s session about amyloid is just one of many in what is a packed schedule at this year’s Alzheimer’s Research UK Conference.

One Response to Taking aim at amyloid