You are here: Home > The Budget on balance for dementia research
By Melody Paton Borchardt from Policy news on 25 October 2018 0

On Monday 29 October the government will present the Budget statement to the House of Commons, laying out its spending plan for the upcoming year. This is the big announcement that helps to set budgets across departments, but this year’s statement likely won’t have a big impact on dementia research. Here’s why and the announcements we’re watching for instead.

Why we don’t expect to see dementia research included 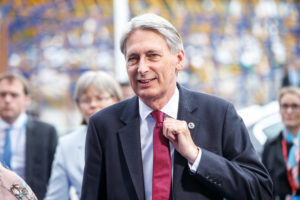 On Monday 29 October, Philip Hammond, Chancellor of the Exchequer, will present the Budget statement.

Early reports suggest the Budget will include major issues like Brexit, the new £20bn funding for the NHS, a continued freeze on fuel duty, and a recent pledge from the Prime Minister to end austerity. With these weighty issues on the table, increased research spending will likely not be included in the address that last year lasted just 47 minutes.

However, the Budget sets the scene for further spending decisions that will be announced in the next few months. We are watching for a couple of announcements that may be made as part of the Budget statement, which could benefit people living with dementia and those impacted by the condition.

The announcements we do expect

Among the announcements we’ll be watching for is a detailed plan for the NHS. This is expected to include sections that focus on shorter-term goals (i.e. in the next 10 years) and long-term goals. After short-listed priorities discussed earlier this summer failed to include dementia, we hope to see dementia specifically recognised in plans for the NHS.

We are also watching for a possible update around the Budget about commitments to early detection of major diseases following on from the Prime Minister’s announcement last spring. Efforts are underway to bring together large-scale patient data in a way that allows researchers to look for early markers of disease in people who go on to develop diseases like cancer and Alzheimer’s. This information can then be used to develop better diagnostic tools to identify these diseases sooner – a key goal for treating people with dementia included in our recently launched action plan for government.

The next big thing for dementia research

The Comprehensive Spending Review, a five year view of government spending across all departments to be announced in the spring, is the next time that investment in research is likely to be assessed. This is when we expect to see the greatest potential support for dementia research.

We know that the government is committed to increasing the overall research budget to 2.4% of the GDP. We hope to see some of this additional funding put toward increasing dementia research spend to just 1% of the annual cost of dementia to the UK.

How you can help in the meantime

We need to build as much support as possible to ask government to increase funding for dementia research. We’re off to a great start, but there’s more work to do.

Each of these only takes a minute or two – please lend your voice to support dementia research!

Write to your MP