You are here: Home > The final goodbye
By Steve Boryszczuk on 9 August 2017 5

Since my wife’s death, I’ve been ticking off the bucket list which she wrote many years ago. As we had children so young, she had planned our worldwide adventure for when they had flown the nest. Of course back then we had no idea she would never be able to fulfil her dream.

I was so proud to have kept up our vows – ‘til death do us part. I did my best right until the end. This was made clear to me when I discovered her diary one day in 2012. I had no idea the diary existed, and there in pen was her handwriting, with details of how she wanted to be looked after. I felt so pleased to know that, despite having never seen it, I’d done all the things she had listed because I knew my beautiful wife so well.

On Tuesday 24 April 2007, Michelle was diagnosed with early-onset dementia at the age of 38. We knew there and then that life would never be the same. 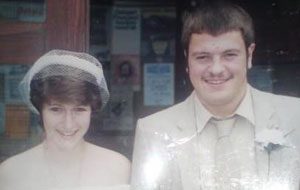 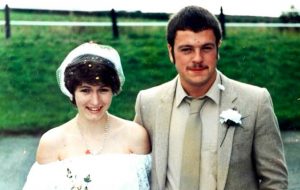 At the time she was one of England’s youngest people living with the disease, just as her dad had been. He had died at the age of 46, and we knew that this too would happen to Michelle.

Telling our two sons that their mum had Alzheimer’s was incredibly hard, and over the next few years it was even harder for us to see the way Michelle completely changed. I never knew what a huge, devastating impact dementia could have on a family until then. When Michelle lost the ability to be independent, I gave up my job to take full time care of her.

She went from being a lovely, outgoing person, so full of life, to having terrifying seizures virtually every day. She became doubly incontinent and eventually couldn’t walk, couldn’t talk, and couldn’t feed herself. In fact, she couldn’t do anything at all.

Over a five-year period I did everything for her I could, to say it was physically and mentally exhausting would be an understatement. The truth is, I never really slept in case she died while I was asleep. That fear kept me awake every night, as difficult as it was I couldn’t bear to lose her.

Though Michelle’s story has a sad ending, I want everyone reading this to know that life continued for our family after she died. I’m now a grandad, and love spending time with my four beautiful grandchildren.

In the past few years I’ve taken on the Great Wall of China, the Yorkshire Three Peaks, the Inca Trail in Peru, walked all 16 London bridges, the Isle of Wight’s 65-mile coastal path, Hadrian’s Wall, Costa Rica coast to coast, including climbing the country’s highest volcano, and finally I will be walking 100km through the Himalayas to Bhutan later this year – the final item on Michelle’s bucket list.

In every place I go on the list I get permission to lay a little brass plaque dedicated to her in her memory. When she died I kept some of her hair, and everywhere I go I leave some so she gets to be in all those places she longed to visit. 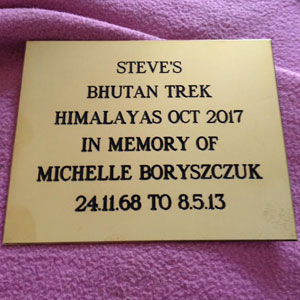 In Costa Rica I left a plaque behind a waterfall in the rainforest, in Peru on a stone at over 3,000 metres above sea level, and the one in Bhutan will be my final one to leave.

This will be an emotional trek in many ways, my last one in her memory. But whenever I walk I know that she is with me. I hope, as this chapter of my life comes to an end, that she would have been proud of me. Not just for doing these treks in her memory, but for raising such desperately needed money for dementia research, and for awareness of early-onset Alzheimer’s. I hope one day there will be a cure for this dreadful disease, so families will never have to go through what my family has been through.

You can power the fightback against dementia. Go to www.alzheimersresearchuk.org/donate to donate today.

Steve is a handyman and Alzheimer’s Research UK fundraiser from Market Rasen, Lincolnshire. He gave up his job as a lorry driver a few years ago to look after his wife Michelle, who sadly died of familial Alzheimer’s disease in 2013, at the age of 44. Since then he has made it his mission to raise awareness of Alzheimer’s, and fundraise for dementia research. In 2017, he ticked off the last item on Michelle’s unfulfilled bucket list for the charity in her honour, by trekking over 100km through the Himalayas to Bhutan.
View all posts by Steve Boryszczuk →

5 Responses to The final goodbye