You are here: Home > The Many Faces of Dementia – a free online course
By Tim Shakespeare on 15 February 2016 1

Dr Tim Shakespeare, an Alzheimer’s Research UK Research Fellow at UCL (University College London) has led the creation of a new free online course called ‘The Many Faces of Dementia’ which will start in March. Tim describes why he created the course and what you’ll learn.

Why we created the course

There are two reasons that we were keen to create this course, and the first is to raise awareness of some of the less common forms of dementia. The second is that we think there are some really interesting and helpful insights that can be gained into dementia in general by understanding these less common forms of the condition.

At the Dementia Research Centre at UCL, some of our research involves people with less common forms of dementia like frontotemporal dementia and posterior cortical atrophy. These often start with symptoms other than memory loss which might strike people as quite unusual for dementia. For example, people with posterior cortical atrophy have difficulty seeing where and what things are due to disruption in the parts of the back of the brain that process visual information; and people with the behavioural variant of frontotemporal dementia experience changes in behaviour and personality. People affected by these conditions and their families often find that people aren’t familiar with these symptoms, and this lack of understanding can add to the challenges of living with the condition. We created this course to raise awareness of four types of dementia that are less common than typical Alzheimer’s disease; these are familial Alzheimer’s disease, behavioural variant frontotemporal dementia, dementia with Lewy bodies and posterior cortical atrophy (PCA). 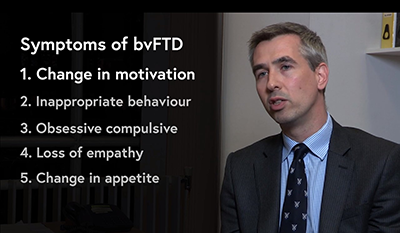 We hope that learning about these less common conditions will also give a different perspective on dementia in general. To take one example from the course, the visual problems that people with PCA have are very striking and often people with PCA are able to describe very eloquently their experiences. Interestingly, people with other forms of dementia, including those in the more moderate and later stages of typical Alzheimer’s disease, may also develop similar visual problems as the disease progresses and spreads to affect areas at the back of the brain. By understanding the kinds of visual problems that people experience in PCA, we hope to be better able to recognise and support people who experience these symptoms as part of another form of dementia.

Caption: In the course you’ll learn about a number of research projects carried out at UCL, for example this project which aims to use a virtual reality setting to measure subtle changes in behaviour. 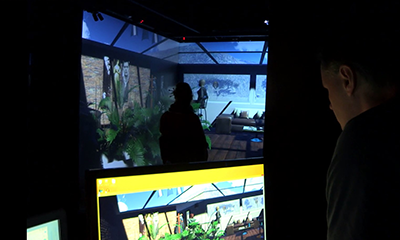 In the course you’ll learn about a number of research projects carried out at UCL, for example this project which aims to use a virtual reality setting to measure subtle changes in behaviour.

What will you learn?

The online course is built around a series of videos with world-leading experts from the UCL Institute of Neurology and Division of Psychiatry who are highly regarded for their work as scientists and clinicians. Importantly, you’ll hear from people who have been diagnosed with dementia, and people who care for a family member with dementia. These interviews with experts-by-experience will help to show what it means to live with dementia, and provide a better understanding of the impact that a diagnosis of dementia brings.

You’ll be able to understand how dementia affects people by watching video interviews, look deeper into the topics by reading articles, interact through activities and questions, and also learn from others on the course by taking part in the discussions that accompany each step.

Watch the trailer below, and join the course now by signing up at www.futurelearn.com/courses/faces-of-dementia.