A group of friends and colleagues cycled 1,000 miles across 10 countries in 10 days to reach the romantic city of Venice in Italy. The group braved snow-capped mountains, rolling hills and vertical climbs, raising over £30,000 for charity. Jack Newton, one of the riders, speaks about the gruelling challenge.

The idea of the VeloVeni was born with the aim of raising as much money as possible​ for Alzheimer’s Research UK and Cancer Research UK. Both charities were chosen because they fund research into diseases which had directly affected members of our 22-strong team. Will had lost his wife and sister to cancer and Neil’s mother has been living with a rare form of dementia for over 10 years.

The majority of the group had never cycled more than two days in a row so this would be a mammoth challenge. Why Venice? Many of those taking part were architects, engineers and building professionals so Venice seemed like an ideal destination with its stunning architecture. The whole trip was organised by those riding, with every penny raised going directly to charity. Setting off in London’s traffic on the first day was the slowest part of our journey, but in the late afternoon sun we escaped into Essex. We boarded a ferry at Harlow and had a good night’s rest on the ferry to the Netherlands.

We cycled 120 miles through the country which was flat and easy, but it got harder as we stopped and started through densely urban areas such as Rotterdam. We made it to the town of Hasselt in Belgium just before sunset.

The next day we travelled through some truly beautiful historic cities such as Liege and made our way into the picturesque countryside of Luxembourg. The rolling hills, lush forests, traditional towns and castles were breath-taking. We left Luxembourg at the town of Schengen and then passed into the Lorraine region of France, before a day of numerous crossings along the France-Germany border. We traced the border through the Alsace region, and finally crossed the Rhine river at Strasbourg.

By day six we were heading to the Black Forest in Germany from the floor of the French Rhine Valley. That night we arrived in the city of Constance, which seemed like an idyllic place for a cyclist to live. The outskirts of the city were connected by a network of bike paths that ran directly into the city centre. We recovered in the cold yet refreshing water of Lake Constance as the sun set, before facing 2,000 metres of vertical climbing the next day.

It started relatively easily through the vineyards on the southern bank of Lake Constance. Cycling into Lichtenstein, we knew we had arrived in the Alps. Onto Switzerland, and the alpine meadows, heavily wooded slopes and craggy peaks reminded us of scenes from The Sound of Music. We climbed up to one of the highest towns in the Alps, Davos. 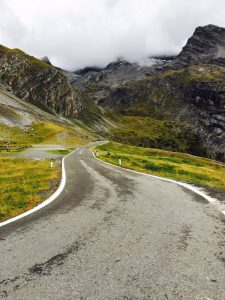 Day eight featured 90 miles and over 3,800 vertical metres of climbing. The long ascent through the Swiss National Park was reminiscent of the Scottish Grampians with its treeless mountain peaks and light drizzle. After tackling two Swiss mountain passes we were in Italy, our final country, where we faced the infamous Stelvio Pass at 2,757m. This included 49 hairpin turns – a relentless and incredible ride in equal measure. As time went on the long slopes split the group with the fastest cyclists over an hour ahead of the slowest.

Luckily we all made it to the top and enjoyed a hot chocolate before facing the magnificent descent down to Bormio in Northern Italy. More daunting climbs followed, the hardest of which was the Gavia Pass at 2,621m, where temperatures dropped to under 5c at the peak. The long descents made it worth the uphill struggle.

After nine days, over 900 miles and nearly 18,000 metres of climbing it was our last day. The first half involved cycling over craggy rocks in the Dolomites, a mountain range in north-eastern Italy. The approach across the flat Venezia region gives nothing away. Suddenly the lagoon appeared and Venice was on the horizon. The 3km bridge crossing was spectacular as the domes and campaniles came into view and the arrival into Piazzale Roma was fantastic. We walked a short distance to celebrate with a few bottles of prosecco on the Canal Grande, where we were greeted by family and friends. What an arrival, what a city, what a journey!

You can support the group at www.veloveni.com.

Jack Newton, an architect at Rogers Stirk Harbour + Partners in London, has been supporting Alzheimer’s Research UK for years in honour of his friend Neil MacKay, whose mum Sheila has been living with frontotemporal dementia for 12 years. Jack, with a group of friends and colleagues, helped raise more than £30,000 for Alzheimer's Research UK and Cancer Research UK following a gruelling 10 day cycle ride to Venice, dubbed the VeloVeni.
View all posts by Jack Newton →

It’s not all about the nerve cells
Behind the big dementia headlines of 2016: are we getting closer to a cure?