You are here: Home > Treasured memories
By Amanda Franks on 12 November 2015 0

Alzheimer’s is a cruel disease. I’ve watched my mum fade by the day and anything that may trigger a feeling or memory is worth a try. When I came across the memory blankets sold through Alzheimer’s Research UK’s Memory Store I didn’t hesitate in ordering one.

I chose a variety of photos. I never quite know which decade Mum is in so I found a selection from across the family and across the ages; and off they went to be made into a blanket.

When it arrived I couldn’t have been more delighted. The quality was outstanding. A thick fleece, I chose a baby pink for the reverse. The pictures were crisp and of a size and colours that I hoped would grab Mum’s attention. 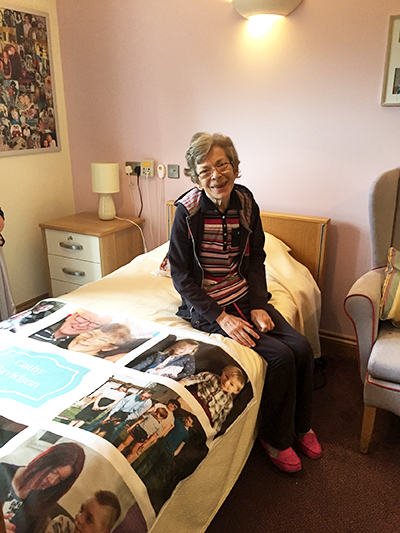 I took the blanket straight over to Mum at her care home. Mum was 58 when she was diagnosed with early-onset Alzheimer’s disease. While she is physically okay, at 65 she is now in the advanced stages of the disease. These days, photo albums and pictures rarely get any attention. I showed her the blanket and she smiled and nodded but following a pointing finger is no longer a natural response. As ever I talked through my latest gift and laid it out across the foot of her bed and carried on chatting. Verbal communication is almost gone but she began to stare at the blanket and smile. I can’t expect a thank you these days, but just seeing a glimmer of recognition and a feeling of warmth pass over her face made it all worthwhile.

A few days later I visited Mum. One of the carers came straight over and said that Mum had taken her by the hand and shown her a picture of me as a child on the blanket. The carer said that Mum pointed to the image and told her she had looked after that little girl. Apparently Mum was very determined to show her. This was a reaction she experienced alone in her room when a brief second of lucidity had allowed her to see and feel the love she had for her family.

The memory blanket is a wonderful item and is there in the moments of clarity. Everyone who visits mentions the blanket. I say she is wrapped in the love, warmth and most importantly the security of her family thanks to this simple blanket.

About The Memory Store

Amanda Franks lives in Swindon, Wiltshire and owns a commercial recruitment agency, Frankly Recruitment. Amanda became a supporter of Alzheimer’s Research UK after learning about the massive underfunding of the condition her mother has lived with since she was 58. Along with her extended family, Amanda raised over £15k for Alzheimer’s Research UK in 2014 with The Gig to Remember – Bringing the Bootleg Beatles and Duke Beatbox to Swindon’s Oasis. Want to know more about Amanda’s story? See www.thegigtoremember.com.
View all posts by Amanda Franks →

Dementia with Lewy bodies: what can the heart tell us about the head?
Dementia Explained – providing dementia information to children