Yesterday, Dr Rita Guerreiro was awarded the great honour of European Researcher of the Year, fighting off stiff competition from dementia researchers across the continent. This fantastic achievement recognised her groundbreaking discovery in 2012; variations in the DNA code of a gene involved in immune system regulation, called TREM2, can increase the risk of Alzheimer’s disease three fold. This discovery set the dementia research community a-light, opening up a Pandora’s Box for scientists discussing the role of the immune system in Alzheimer’s. While this wasn’t the first time the immune system was implicated in Alzheimer’s, it was the strongest suggestion yet that the body’s defence system may actually be involved in the progression of the disease, rather than purely a consequence of nerve cell damage in the brain. But identifying a risk gene was just the start. The genetic studies have spawned a wide range of projects trying to better understand the role of TREM2 in Alzheimer’s. Let’s take a look at some of the ongoing work that Alzheimer’s Research UK is proud to be funding. 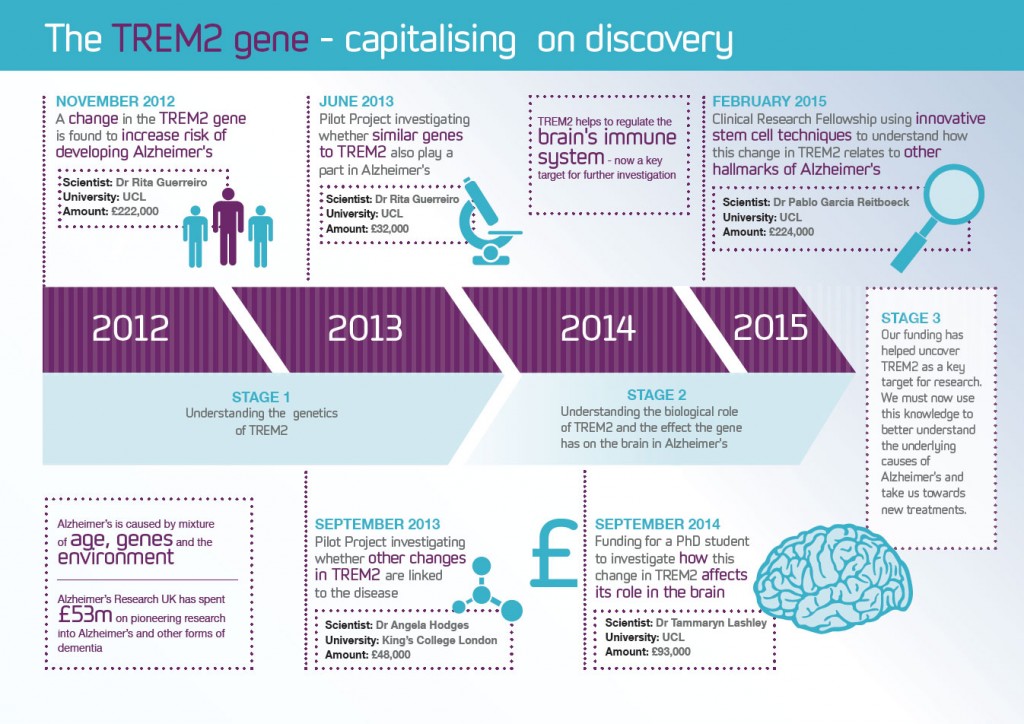 TREM2 is a gene that codes for a protein of the same name produced by microglia – the brain’s immune defence cells. The TREM2 protein decorates the surface of microglia cells and regulates their response to infection and injury.

Dr Guerreiro, working with a global team of scientists, discovered that people who have a rare variation in DNA code that makes up their TREM2 gene are three times more likely to develop Alzheimer’s than those with the more common versions. This variation in the TREM2 DNA code – known as a mutation – means that the protein is assembled with the incorrect building blocks, leading to decreased function. Without TREM2 to keep microglia in check correctly, it’s thought that these immune cells become hyperactive. The immune response is the body’s weapon against damage and attack. But too much of a good thing can be dangerous and inflammation can frequently become the foe within.

About her award, Dr Guerreiro said:

“I’m really honoured to have received this award. The TREM2 genetic study came about as a result of hard work from a team of global scientists and I am proud to have led this work with Professor Hardy and our group here at UCL. It’s so exciting to see all the work that has come about as a result of the discovery and I look forward to the scientific community working together to find out more about TREM2 and the immune system in Alzheimer’s. I hope that these findings take us a step closer to finding treatments for the disease, which affects so many people around the world.”

Understanding the genetics of TREM2

The next step for Dr Guerreiro and other researchers was to look at the proteins that TREM2 interacts with. TREM2 does not sit in isolation on the microglial cell surface; it is a member of a complex of proteins involved in immune system regulation. In 2013, we funded Dr Guerreiro to start a Pilot Project exploring genetic variations in the other members in this regulatory complex. Working with Dr Angela Hodges, another Alzheimer’s Research UK Pilot Project grantholder, they set out to narrow in on other possible genetic changes that affect the molecular chain of events controlling TREM2. While this could highlight more risk genes for Alzheimer’s, the key aim is to understand more about the biology underpinning the disease. This deeper understanding could help find new treatments for the half a million people living in the UK with Alzheimer’s. 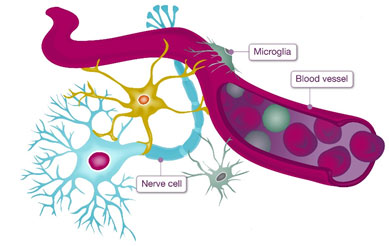 Understanding the biological role of TREM2

While some teams have been focussing on the genetics of TREM2, others have started to look at how these changes to the function of TREM2 affect brain biology. Christina Murray, a new PhD student working with Dr Tammaryn Lashley at University College London, is looking at the levels of the TREM2 protein in donated human brain tissue. We’re funding Christina to investigate in whether changes in TREM2 alter the appearance and activity of microglia in response the amyloid plaques in Alzheimer’s. This will help her build a picture of the chain of events that drives Alzheimer’s and where TREM2 comes in.

In work getting under way in the coming weeks, Alzheimer’s Research UK Clinical Research Fellow, Dr Pablo Garcia Reitboeck, aims to use new stem cell technology to study microglia. Dr Garcia Reitboek will take skin cells from people who have the mutated version of TREM2 and turn these into microglia in a dish. He predicts that changes in the function of TREM2 alters the ability of microglia to ‘eat-up’ and clear the dangerous build-up of amyloid in the brain. He will also look at whether microglia with mutated TREM2 can trigger a harmful inflammatory response which damages nerve cells. By shedding greater light on these wayward microglial actions, researchers hope to find new ways to halt the damage in Alzheimer’s and keep precious brain cells healthier for longer.

The impact of the TREM2 discovery lies not so much in predicting who might get the disease; only 0.3% of the population carry the mutation. Rather, it suggests a new player in the biological chain of events that lead to Alzheimer’s. By honing in on the role of TREM2, as well as looking more broadly into the contribution of the immune system to the disease, researchers will find new approaches for treatments and new hope for those living with Alzheimer’s.

5 Responses to TREM2: Where are we now?