You are here: Home > Two years on from the G8 dementia summit – what progress has been made?
By Susan Mitchell from Policy news on 20 January 2016 1

In December 2013 the UK government hosted the G8 dementia summit as part of its G8 presidency. So what has happened since then, and what progress has been made towards meeting the key aim to develop a cure or disease modifying therapy by 2025?

It has been a busy time. Two years on from the landmark event that promoted dementia onto an international stage and gave it much needed attention, relationships have been fostered, strategies developed, and initiatives have been set up. The diagram below summarises what has been happening internationally, in the UK, and by ARUK since the G8 summit. ARUK has launched several innovative research initiatives to address gaps in the pathway to finding a treatment or cure for dementia, including a Global Clinical Trials Fund and an alliance of three Drug Discovery Institutes. 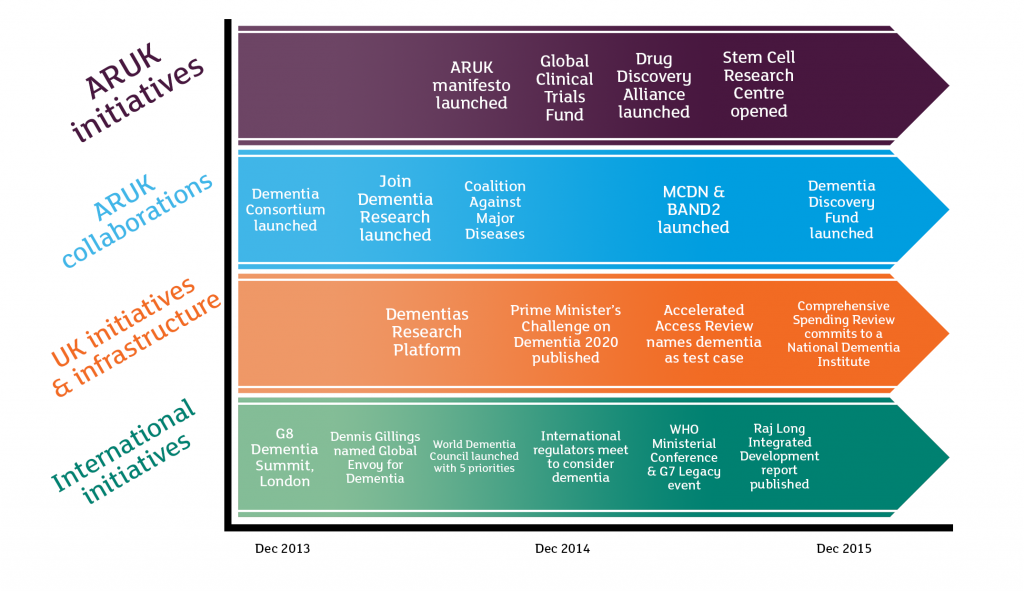 A key agreement of the G8 summit was the recognition that dementia research was chronically underfunded. Learning from the approach taken for HIV/AIDS, where global financing and cooperation of research led to relatively rapid progress in the understanding and treatment of the condition, a similar approach is being sought for dementia. The World Dementia Council was created 18 months ago to create a joined up global approach to the challenges of dementia. It has met 5 times and agreed priorities around financing, regulation and the global integrated development of new treatments. The next step is to convert these plans into outcomes.

The launch of the Dementia Discovery Fund in October 2015 is an innovative starting point for global financing. Collective investment of $100million from the UK Department of Health, Alzheimer’s Research UK and several pharmaceutical companies will be used to fund new approaches to develop the early stages of potential new treatments. The fund is now aiming to raise further money to increase the number of investments it can make in potential future treatments.

There is also international joint working between the organisations that regulate medicines to help ensure that any treatments developed can get to people living with dementia as quickly as possible.

The Prime Minister’s challenge on dementia 2020 was published in 2015 and outlines the government’s key aspirations to improve dementia care, support and research by 2020. There is a commitment to doubling research funding by 2025, and to establish an international dementia institute.

Within England there is currently a review in progress to consider how to speed up access to innovative drugs, devices and diagnostics for NHS patients. This Accelerated Access Review is considering the whole pathway of innovation and ARUK have contributed to the process by highlighting the particular issues for dementia. The importance of dementia as a condition has been recognised, and is being used as a test case for the review.

It has been recognised that there are not enough people taking part in dementia research studies and it has been difficult to recruit to clinical trials – a key reason for a number of recent failures. To address this Join Dementia Research has been developed. It is a database of people with dementia (and those without a diagnosis who can act as controls), with the aim of increasing the number of people with dementia who are prepared to take part in research and providing a facility to match these people to active research projects. This provides a vital process to deliver the highest quality research.

The G8 summit and wider work by Alzheimer’s Research UK has had other, more indirect impacts. In the past two years the level of media attention around dementia has increased significantly. The simple act of more coverage helps to start address the stigma, fear and misconceptions around dementia. With better public understanding comes recognition and support for the challenge ahead.

So do we have a disease modifying treatment or cure for dementia? Well no. But tangible progress has been made in the past two years; there is a definite sense of momentum and collective commitment to defeating dementia. Many of the foundations for success have been put in place, we now need to build on them.

Tagged with: Parliament, Government funding, Our work
The future of dementia is orange
International Women in STEM day 2016

One Response to Two years on from the G8 dementia summit – what progress has been made?