You are here: Home > Volunteering for dementia research
By Jude Clarke on 16 April 2019 0 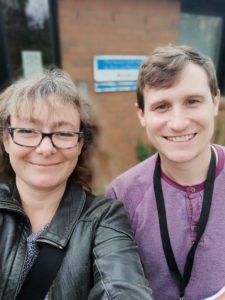 I’m lying in an enclosed white tunnel. Ahead of me is a black tinted window, behind which I can see friendly faces smiling encouragingly. Although I am wearing ear plugs I can still hear muffled clangs, crashes and… a rather banging selection of ‘90s rave tracks.

Nope, this wasn’t all a rather surreal dream. This is the fun and fascinating world of dementia research.

After signing up to the Join Dementia Research initiative a few months ago, I was selected to take part as a healthy volunteer (someone who is not living with dementia) for a study called SENDeR, looking at brain connections (synapses) and how their loss leads to dementia and other
brain illnesses.

A few explanatory emails from my friendly researcher Dr George Savulich (see selfie) later, and I was in a taxi to Addenbrooke’s Hospital’s Herschel Smith Building for Brain and Mind Sciences and had officially become A Research Volunteer.

Either side of the MRI, though, came a series of mind-bending tests focusing on my memory, language, vision and attention. This was probably the toughest brain workout I’d had since leaving uni (more years ago than I care to admit). The most difficult moments were trying to count down from a hundred at intervals of seven, and doing my best to think of NON-rude words starting with the letters P and F, when tasked with listing as many words as possible in a set period of time.

Then it was on to the rave-MRI, for the researchers to take several short scans of my brain (to look at its size, shape and wiring).

Why the mini-rave? Put on the spot, I was asked what music I would like to listen to while lying in the machine for the next hour. I knew that anything soothing or gentle would send me to sleep within seconds of the scan starting, so I opted for the most lively and upbeat Spotify playlist I could think of.

And it was fun! I swear at one point I could see some “arms in the air” dancing from behind the tinted window where the technicians and researchers were working…

All in all, the half day I spent taking part in this research project was a fascinating, worthwhile and most of all straightforward process. The team organised my transport to and from the clinic, I was plied with tea and coffee on arrival, and even treated to M&S’s finest sandwich choices for lunch.

In return, I got to spend some time testing my memory and brain capacity (and ability to think of words that weren’t swear words), a nice little horizontal, immobile rave and the satisfaction of knowing that I was contributing, in a small way, to the progress of vital dementia research. Willing volunteers taking part in research are vital to help make much-needed breakthroughs possible.

Join Dementia Research is a national service which allows members of the public to register their interest in taking part in dementia research studies. Find out more or join up at www.joindementiaresearch.nihr.ac.uk or by calling 0300 111 5111.

View all posts by Jude Clarke →

Rare genetic discoveries driving breakthroughs for everyone affected by Alzheimer’s
How can a mobile game help detect Alzheimer’s risk?