You are here: Home > Walnuts And Wheelnuts: raising funds doing what we do best!
By Davie McGirr on 30 August 2018 0

There is only one thing on my mind this morning –  the open road.

To be fair when I say just one thing I’m actually thinking of a couple of other related things – guitars, sausages, bagpipes, vineyards, fiddles, idyllic hillsides and extraordinary breakfasts. It’s a month or so since The Walnuts came home from our Motorhome tour of Spain and France.

This is a story about how and why we raised just over £5,000 for life-changing dementia research.

Firstly, a bit of background… 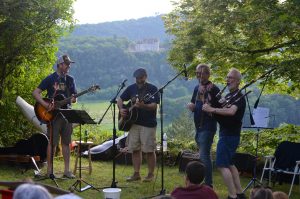 The Walnuts are a group of middle-aged musicians who were lent a motorhome to travel, play music, eat sausages and collect donations in our bucket everywhere we played. The result was we played eight gigs in seven days, while travelling to Barcelona and back – a round trip of 2,400 miles –  and two final gigs when we got home to Berkshire to complete the mammoth trip of 10 gigs in 10 days.

Throughout the year we also play in living rooms, kitchens and gardens. It’s called SevenSongs – we pitch up, play seven songs, pass around our bucket and then leave. Better than watching the telly.

Davie McGirr: me – the founder of sevensongs.org and owner of a guitar; 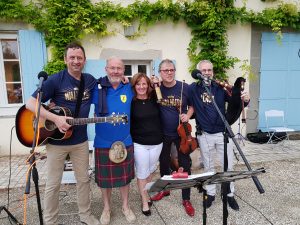 My wife, Nicky, spent over nine years or so supporting her Dad, Paul, while he looked after her Mum, Val, who had early-onset Alzheimer’s. I tried to help where I could, we eventually built an annex on our house with Paul and Val’s help and they came to live with us and our two children.

I saw first-hand the effects dementia has not just on those living with it but also on the family and friends trying to help.

That’s why I started SevenSongs. You’d invite me to your home for 30 or 40 minutes of live music and donate to Alzheimer’s Research UK. Ideal for family gatherings, barbeques, dinner parties, book clubs or just instead of the telly. I did this for about 18 months and probably 60 or 70 gigs before I met Matt on his radio show.

Matt started turning up with me to play in a couple of living rooms which was very entertaining and we were also quite good. Donald started playing with us on his fiddle (he is a proper musician and makes us sound a bit more special) and we became The Walnuts. Last year we toured up to Oslo and back with my mate, Simon, and this year the amazing Fergus joined us with his pipes for our Barcelona tour and we’re already planning some more gigs and trips.

I thought the best way to describe our recent trip was to ask our tour chronicler, Matt, to sum it up.

“My proudest moment was getting the rig around the Dordogne single-handed without the aid of GPS or Vaseline (we were taking a giant white motorhome through places where Motorhomes aren’t supposed to go!).

So many great moments we had – partying with the Asturians, learning that there’s no such thing as bad cheese and that you should always look behind you in case you’re about to step on someone’s bagpipes.

I loved all of the places we visited, but La Liviniere vineyard was special because of the backdrop and the joy coming from the crowd. What a place. I also have a soft spot for a service station outside Le Mans.

I loved our round trip to Barcelona too – we caught up with with old pals and met some amazing new friends.

We make this all sound like a pretty jolly beano but there are two moments that stick in my mind that show the challenge our generation faces with dementia.

We played in a school in Northern Catalonia to a class of 15 year olds and some were in tears when we explained why we were touring. They clearly had someone living with dementia in their family. 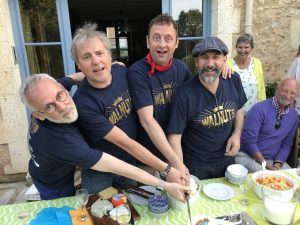 Then, later the same day, in a restaurant in L’Escala on the coast of the mediterranean we played to a packed group of retired expats. That morning one of their friends had gone out for his paper and hadn’t made it home. His wife was terrified. They sent out search parties and eventually found him three hours later. Too late to join us at the restaurant but a reminder of struggles carers, friends and those living with dementia face on a daily basis.

So get in touch if you’d like SevenSongs to play for you – no audience too small, no situation too embarrassing, no island too remote and no music too live – it might just be me, Davie, or a combination of Walnuts. Email me at davie.mcgirr@gmail.com.

NB we all have jobs and families so kind of depends on availability, so book early.

Meanwhile I will think of the open road and my extraordinary bandmates who freely gave their time and the people and places that made our trip so special.

Find out more at www.sevensongs.org

View all posts by Davie McGirr →

Give and get: the smart investment that benefits you and Alzheimer’s Research UK
If at first you don’t succeed: My Jurassic Coast Experience