Having lived in Aberdeen her whole life, Ali Blaikie, was very excited to hear that the Alzheimer’s Research UK conference is coming to Aberdeen this year. Running 14-15 March, it is the biggest annual dementia research conference in the UK. It is an opportunity for researchers from around the world to come together and share their findings, pushing us further towards much-needed treatments for dementia.

Ali, who is an Alzheimer’s Research UK Champion, knows all too well the effect dementia can have on a family. She sadly lost her dad to Alzheimer’s disease in 2012. We found out more.

When my dad was diagnosed with Alzheimer’s disease, I really had no idea what it was or what lay ahead for him. We were aware that things had been changing for him for the past couple of years. He was becoming increasingly repetitive and did get things wrong, but quite often he corrected himself. We all do that, don’t we?

To begin with, I was in denial about it all and thought everything was going to be ok. It soon became evident this was not the case and so began my journey into the world of Alzheimer’s disease, and being part of my dad’s life, as he lived with this most cruel and debilitating disease.

Dad was a fit, healthy man. He’d worked hard all his life and his retirement should have been filled with travelling and all the things he loved to do: big hikes with Mum, spending time with family and enjoying the most relaxing time. Instead, he faced a very scary and uncertain future.

This disease quickly took a full grip on him. He lost the ability to do most things for himself, simple everyday things such as taking a shower, getting dressed, brushing his teeth or making a cup of tea. He became unrecognisable as my dad. He lost all inhibitions and, when out, we did have some embarrassing moments. I know he would have been horrified by some of his behaviours had he been aware – he was always such a gentleman.

I used to question and challenge him, thinking that I was helping to stimulate his memory. Little did I know I was just confusing and frustrating him even more. The day I asked him who I was and his reply was “Mary Fisher” was one of the saddest days of my life. He no longer recognised me as his daughter. Mary Fisher was a girl with red hair, like mine, he had gone to school with. He called me Mary many times. I really wish I had known then what I know now and I had just joined him in his world. Our conversations would have been so much more fun! 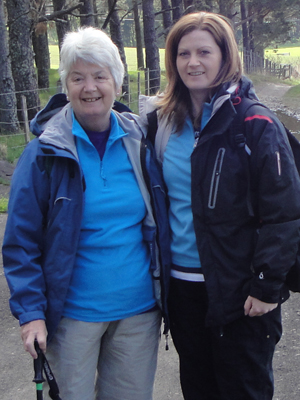 The sense of helplessness that I felt, seeing my dad every day, was overwhelming. He was living in complete confusion, losing all memory of who he and his family were and not able to do anything to stop it. This, along with finding out how underfunded dementia research is, is why I made the decision to start fundraising for Alzheimer’s Research UK.

I was very excited to hear that the Alzheimer’s Research UK annual conference is coming to Aberdeen this month. Having supported the wonderful work the research teams have been doing over the last eight years, it will be just brilliant to have these amazing scientists in Aberdeen and hear all about their new and amazing findings in dementia research. I do firmly believe that they will find us that cure.

Ali is part of our Aberdeen Fundraising Group, running events in her area to raise awareness and vital funds for research. To find out about Fundraising Groups near you, or to set up your own, visit http://www.alzheimersresearchuk.org/volunteering/alzheimers-research-uk-regional-groups/

Ali Blaikie is a Champion of Alzheimer's Research UK. She started supporting the charity after seeing her dad diagnosed with Alzheimer's disease. He sadly passed away in 2012. She continues to do everything she can to fundraise for dementia research.
View all posts by Ali Blaikie →

Another year, another marathon
Is dementia research keeping pace?

One Response to Welcome to Aberdeen