The documentary The Trouble with Dad that I’ve made with my brother Ivor and SunDog Productions stars…my dad. That seems clear to me, when I watch it. The star of this film is Colin Brian Baddiel. My dad is the star of the film not just in the sense that it’s about him, and tells his story, but because he, in most of the scenes he’s in, dominates the room. He’s funny and sparky and wild and putting everyone else down and winding everyone up, and the viewer, I would suggest, just wants to see more of him. I don’t know if he fits the old Hollywood male formula of “women want to sleep with him, men want to be him” – probably not quite – but he is the star.

Why am I going on about this? I know showbiz people are obsessed with billing, but this is ridiculous… you may be thinking. 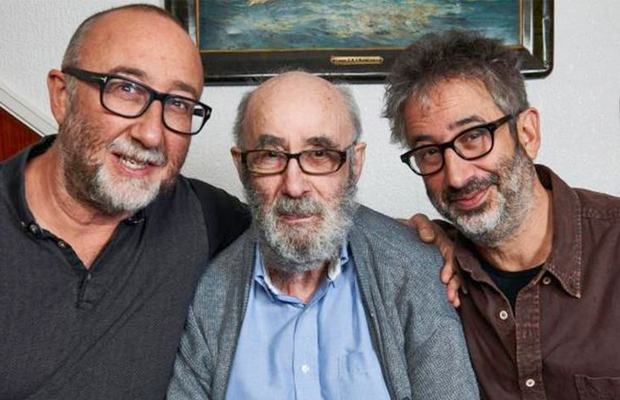 David, right, with his father Colin and brother Ivor

The reason is that when we started this film I wanted to show another side of dementia – a different version of it. My dad has Pick’s disease, a frontal lobe dementia, and it’s a very different form of brain disorder to Alzheimer’s. Although short-term memory loss is part of it, the main symptoms are anti-social behaviours – swearing, aggressiveness, inappropriateness, mood swings etc etc. For me and my family, this was weird, as my dad had always been like that. So what happened when he got Pick’s Disease was a kind of cartooning of self, an exaggeration of who he’d always been.

And, to some extent, this was why I thought it was OK to put him on film. Because he’s not the empty object of pity that documentaries and movies about people with dementia can sometimes make them out to be. He’s not just sitting in a wheelchair covered in a tartan blanket staring into space. He’s not only vulnerable. Quite the opposite, for much of the time. My dad is more likely to be dictating everything, making the conversation entirely about him and his (normally extremely off-colour) banter. He is what people schooled in improvisation technically call high-status. He is anarchically powerful: a whirling dervish, a bull in the china shop of our everyday restraint and politeness.

The Trouble with Dad airs on Channel 4 from 9pm on Monday, 20 February.

David Baddiel is an award-winning comedian, author, screenwriter, director and television presenter known for his work with Newman and Baddiel, Fantasy Football, Baddiel & Skinner Unplanned, and his platinum number one single Three Lions. A published novelist and a screenwriter, Baddiel is the author of several children's novels: The award-winning The Parent Agency is now being developed into a film by Fox 2000. He has also written four critically-acclaimed adult novels and the hit film The Infidel starring Omid Djalili, Richard Schiff, Matt Lucas and Miranda Hart. David returned to stand-up comedy in 2013 with his critically acclaimed show, Fame: Not The Musical. In Spring 2016 he premiered his newest show, My Family: Not the Sitcom, at London’s Menier Chocolate Factory. The show since went on to complete a five-week stint on London’s West End, returning in March 2017 for a 12-week run at The Playhouse.
View all posts by David Baddiel →

10 Responses to Why we made The Trouble with Dad…