You are here: Home > Windows into Alzheimer’s: How scientists are revealing the brain’s inner workings
By Robin Brisbourne from Science News on 11 November 2014 1

One, rather literal, barrier to dementia research is the human skull. Not being able to directly observe the brain has meant that scientists have had to develop ingenious ways to visualise what is going on in the brain in diseases like Alzheimer’s. We call this field of study neuroimaging.

Over 100 years ago a German doctor used imaging techniques that were state-of-the-art at the time, to first describe changes in the brains of people with the disease that would later bear his name. Alois Alzheimer applied dyes, developed for the German textile industry, to thin slices of brain tissue donated by people who had lived with the condition. These dyes showed up areas where two proteins, amyloid and tau, had clumped together in plaques and tangles. Using a microscope, Alzheimer was able to see these protein buildups clearly enough to produce the drawings below. 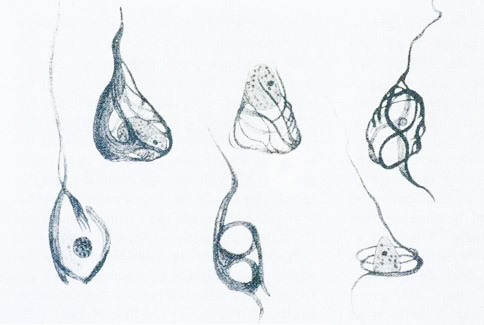 While Dr Alzheimer’s discoveries were crucial in uncovering key aspects of the disease, he couldn’t have imagined that within decades scientists would have technology allowing them to see into the brains of people living with the condition.

Magnetic resonance imaging (MRI) scans, however, use powerful magnets to produce high quality structural images that can reveal the internal anatomy of the brain. In Alzheimer’s disease, as nerve cells die, areas of the brain start to shrink – MRI scans can tell us which areas of the brain are most affected. The image below shows a structural MRI scan of the brain of someone with Alzheimer’s next to a healthy brain. You can see that the person with Alzheimer’s has more black spaces around the outside of the brain, and in the spaces inside. This is where important nerve cells have been lost and this is what causes symptoms like memory loss, confusion and personality changes that can be so common in the disease.

Image: Julio Acosta-Cabronero from the University of Cambridge

Some scans can record not just the structure of the brain but the activity- what is happening in the brain in real time. We call this functional imaging. A functional MRI (fMRI) scan, for example, measures how much blood a particular part of the brain is using at any one time. This allows scientists to draw conclusions about how active that region is during a particular task- when we’re forming new memories for example. This knowledge is vital not only for helping researchers understand how the brain goes wrong in diseases like Alzheimer’s but for developing more accurate techniques to detect and diagnose them.

While these kinds of brain scans are helping us to learn a lot about the brain and the effect of diseases like Alzheimer’s, the next generation of scans are providing an even more detailed window into the workings of the human brain.

However, a definitive diagnosis of Alzheimer’s is only made if the two proteins that Dr Alzheimer identified, amyloid and tau, are present in brain tissue examined post mortem. It is these two proteins that are still thought to be the chief culprits in the disease. Understanding how they accumulate and spread is a key goal of Alzheimer’s research. Huge advances in brain scanning techniques are now allowing researchers to see amyloid and tau inside the brain of a living person. Interestingly, they use an imaging procedure with some similarities to those Dr Alzheimer’s used over 100 years ago.

Positron-emission tomography (PET) scans make use of dyes in much the same way Dr Alzheimer did. These modern dyes, however, carry a radioactive ‘tag’ and can be given to people with Alzheimer’s by way of an injection. The dyes are designed to travel through the blood to the brain and bind to either amyloid or tau. Scanning the brain with a PET machine then produces images highlighting hotspots of the target protein by detecting the radiation being given off from the dye. 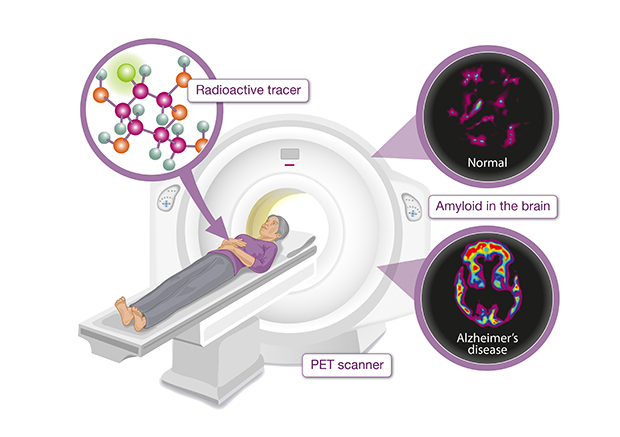 Amyloid build-up in the brain is thought to begin around a decade before memory problems in Alzheimer’s disease. Amyloid imaging has been possible in research labs for some years now, but despite this, it is not routinely used by doctors in the diagnosis of the disease. One important reason for this is that some people seem to develop amyloid plaques without having memory problems, so called ‘asymptomatic Alzheimer’s’. Clearly, there is more going on in the disease than amyloid build-up alone.

Researchers are only just developing scans that can image tau in the brain. Alzheimer’s Research UK-funded researchers are busy using these innovative tau imaging PET scans to better understand the way that Alzheimer’s and some other dementias develop. We hope that these scans will further our knowledge of these diseases, aid us in the development of new treatments and allow us to determine at what point in diseases like Alzheimer’s these future treatments might be most effective.

Neuroimaging has come a long way in the hundred years or so since Alzheimer first described the disease. Advances in engineering and science have the potential to deliver even more progress in the fight against dementia and our researchers are leading the charge.

One Response to Windows into Alzheimer’s: How scientists are revealing the brain’s inner workings