You are here: Home > ‘Wonderful, insightful and beautifully acted’ – Old Fools at Southwark Playhouse
By Philip Grant on 16 March 2018 0

Old Fools, a play by Tristan Bernays, is on stage at the Southwark Playhouse until 7 April, with the production kindly choosing to raise funds for Alzheimer’s Research UK. It’s a surprising, funny and touching tale about a couple, one of whom is living with Alzheimer’s, and their enduring efforts to hold their relationship together through the years. Alzheimer’s Research UK Champion Philip Grant, who lost his wife Liza to dementia aged just 58, was invited to Press Night.

As someone who recently lost a loved one to dementia, I was apprehensive about seeing this play. Would it be an accurate portrayal of the effects of dementia? Would it over-dramatise its impact on relationships or, worse still, sentimentalise it?

I needn’t have worried.

Old Fools is not a meditation on dementia: it is first and foremost an everyday love story; a love story that sensitively but candidly portrays the joy, the anger, the pleasure and the pain of sharing your life with another human being, with all their flaws and foibles. It reveals, rather than describes, the trajectory of Tom and Viv’s life through a poignant series of vignettes and episodes showing their courtship, their struggles with financial hardship, with parenthood, with infidelity and – when finally they seem to have put their troubles behind them – Viv’s agonising confrontation with the consequences of Tom’s progressive dementia.

Because playwright Tristan Bernays eschews the conventional chronological order of a life story, he is free to juxtapose humour (and there is plenty of humour – this is not a gloomy play) and deep sadness; joy and anger; and above all the lively, vital Tom with the unresponsive, utterly dependent Tom claimed by dementia. Early on in the piece we experience a shockingly abrupt transition, cleverly emphasised by an effective lighting change, from a witty, charismatic Tom winning Viv’s heart to a hunched, mute Tom being washed like a child.

To those who have experienced the fading of the light of recognition in their loved one, the most poignant moment in the play comes as Viv tenderly tells the ailing Tom that she loves him. Tom echoes her words: “ I love you, I love you” and our hearts lift. Then he adds the single crushing word: “mummy”. We share with frightening clarity Viv’s desolate realisation that she has lost the man she loves, who now inhabits a confused and incoherent world where past and present co-exist.

To its credit, Old Fools does not flinch from confronting the emotional challenges that dementia brings. Viv is a strong woman, whose love for Tom has survived his peripatetic professional life, his fecklessness and even his infidelity, but confronted with the empty shell of a man that he has become, she falters. Her anger, her desperation, her utter helplessness will resonate strongly with anyone who has watched their life partner fade inexorably away.

It would be wrong not to mention the central importance of music in Old Fools. Tom is a professional musician and his life with Viv is enriched and defined by music. And it is shared music that provides the last bridge that connects them when all other contact has been severed. When Viv has to prompt Tom with the words of “their song” as they dance, we know that she has finally lost him.

This is a wonderful, insightful play and it is beautifully acted by Mark Arends and Frances Grey, who utterly convince as they move seamlessly between their younger and older selves. It offers a moving portrait of two people whose love can overcome any obstacle except the inability to express it. That is what dementia does. 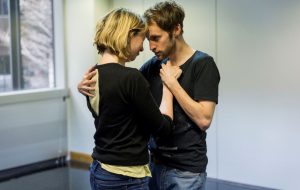 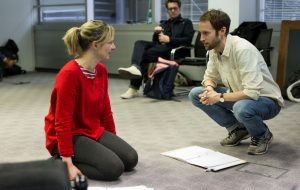 You can read more about Philip and his wife’s experience of dementia in his recent blog for the Huffington Post. 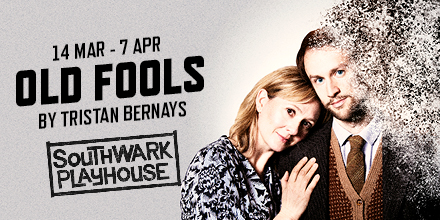 View all posts by Philip Grant →

Your data, your power: How you can help save lives
A year of progress, thanks to you