You are here: Home > Raising awareness of young-onset dementia at the House of Lords
By Jill Walton on 9 December 2014 3

Today we’ll be visiting the House of Lords to raise awareness of young-onset dementia. Along with our colleagues at University College London, we’re very excited to be involved in organising this event and hope to spend a productive afternoon raising awareness that dementia can affect younger people; that it doesn’t only affect memory, and that better support is required to meet the particular needs of people with different symptoms and a younger age. The event, hosted by Baroness Sally Greengross OBE, will be attended by people affected by young-onset dementia, members of the House of Commons and the House of Lords, representatives from charities (including Alzheimer’s Research UK) and other health related bodies (such as the College of Optometrists and Care Quality Commission).

What is young-onset dementia?

People with symptoms starting before the age of 65 are described as having young-onset dementia and there are more than 64,000 people with the condition in the UK. It is important to know that people with younger onset dementia are much less likely to have memory problems than older people with dementia. Instead, they may experience problems with language, vision and behaviour or personality as the first symptoms. The circumstances of younger people with dementia might be quite different from older people; for example they may be in paid employment and have young or teenage children living at home. Because of this; people with young-onset dementia need age specific and disease-relevant provision of care. However these needs are not routinely met by existing services. 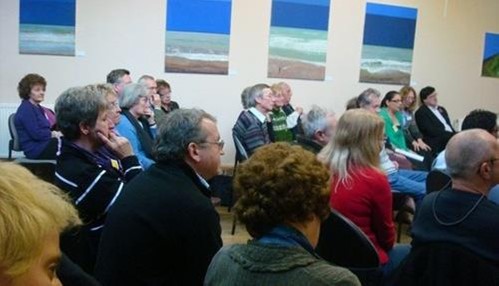 There is also a real need for funding for research to understand more about young-onset dementia. Prof Nick Fox from the Dementia Research Centre at UCL will speak about some of the pioneering research he and his team are doing into young-onset dementia, which benefits from funding from Alzheimer’s Research UK.

How will this event help?

We’re hoping that this event will raise awareness of the particular challenges faced by younger people with dementia, and that these can be met by improving knowledge about these conditions, allowing more timely diagnosis and providing relevant information and support to people who have been given a diagnosis. Members of the five support groups we run for people with young-onset dementia often have difficulty getting access to the support they need, and report a lack of understanding about their condition from medical and other professionals. We hope that this event is a positive step towards addressing these needs.

Jill Walton currently works as a nurse advisor to and coordinator of 5 young onset dementia care support groups affiliated to the Dementia Research Centre at the National Hospital for Neurology and Neurosurgery. With over twenty years nursing experience, she has degrees in psychology and gerontology and has combined practical caring with academic research and learning. Jill firmly believes that the people with a diagnosis of dementia, as well as those caring for and interacting with them need to be well informed and resourcefully equipped. In addition to her work with support groups , she is the founder of ‘Dementia Dimensions’ a resource through which she delivers tailored training courses and presentations to a range of professionals, in the belief that a raised awareness and a relevant knowledge base creates changes in attitudes, skills and practice which ultimately ‘enhance care through understanding’.
View all posts by Jill Walton →

‘Join dementia research’: How long before I can take part in a study?
The Global Clinical Trials Fund: drugs and dummies